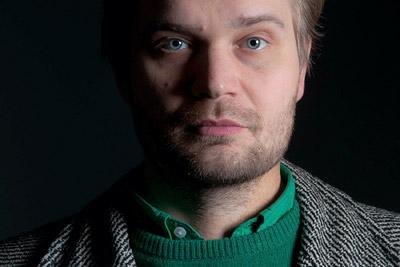 Mikko Innanen (b. 1978) began playing the alto saxophone at the age of ten. He graduated with a Master of Music degree from the Jazz Music Department of the Sibelius Academy in 2003. Innanen spent one year of his studies - fall 1998 and spring 1999 - in Copenhagen at the Rhythmic Music Conservatory, where he studied with and befriended a number of Danish and other students, leading to collaborations that still continue today.

In the past decade or so, Innanen has established his position as one of the most innovative saxophonists and composers hailing from the Nordic scene for jazz and improvised music. He has also spent a considerable amount of time in New York City performing with many of the leading improvisers on the local scene. To date, he has participated in close to 50 recordings as a leader, co-leader or featured member of an ensemble. In November 2008, Innanen received the Finnish Jazz Federation´s annual Yrjö Award as the Finnish jazz musician of the year. William Parker (b. 1952) is an improviser and composer born in the Bronx in New York City. He studied the double bass with Richard Davis, Jimmy Garrison, Wilbur Ware and Paul West and also plays the shakuhachi, double reeds, tuba, donso ngoni and gembri.

Parker entered the music scene during New York´s loft jazz era in the early 1970s, performing at Artist House, Studio Rivbea, Studio WE, Hilly´s on The Bowery, the Salt and Pepper club and The Baby Grand, among others. His particularly memorable early appearances include a performance with pianist Cecil Taylor´s big band at the Carnegie Hall in 1974 and with trumpeter Don Cherry at the Five Spot in 1975.

Parker´s early collaborations with the dancer and choreographer Patricia Nicholson created a large repertoire of composed music for ensembles ranging from solo works to big band projects. Some of this previously unreleased music by Parker´s early groups, such as the Music Ensemble, Centering Music/Dance Ensemble, Centering Big Band and The Aumie Orchestra, has recently been made available (Through Acceptance Of The Mystery Peace, recorded in 1974-76, and Centering - Unreleased Early Recordings 1976-1987). While continuing their artistic collaborations, Nicholson and Parker have also been central forces behind the annual New York Vision Festival, which began in 1996 as a successor to the Sound Unity Festival that Parker had initiated with fellow bassist Peter Kowald in 1984.

Parker first recorded with saxophonist Frank Lowe (Black Beings and The Lowoski in 1973 and Out Loud in 1974), thereby beginning a recording career that now includes some 400 releases.

Parker has participated in a number of collective groups, including the Melodic Art-Tet (with trumpeter Ahmed Abdullah, saxophonist Charles Brackeen, drummer Roger Blank and percussionist Tony Waters; Melodic Art-Tet in 1974), Trio Hurricane (with saxophonist Glenn Spearman and drummer Paul Murphy; Suite of Winds in 1986, Vision Volume One in 1997 and Live At Fire In The Valley in 1997), Collective 4tet (with trombonist Jeff Hoyer, pianist Mark Hennen and percussionist Heinz Geisser; The Ropedancer in 1994, Live At Crescent in 1997, Moving Along in 2002 and In Transition in 2008), Other Dimensions In Music (with trumpeter Roy Campbell, saxophonist Daniel Carter and drummer Rashid Bakr; Other Dimensions In Music in 1989, Now!, Vision Volume One and Time Is Of The Essence Is Beyond Time in 1997, Live At The Sunset in 2006 and Kaiso Stories in 2010) and Die Like a Dog Quartet (with trumpeter Toshinori Kondo, saxophonist Peter Brötzmann and drummer Hamid Drake; Die Like A Dog in 1993, Close Up in 1994, Little Birds Have Fast Hearts No. 1 and No. 2 in 1997, From Valley to Valley in 1998 and Aoyama Crows in 1999), among others.

In the early 1990s, Parker began leading two new ensembles: In Order To Survive, which started as a sextet but then became a quartet with Rob Brown, pianist Cooper-Moore and drummer Susie Ibarra (In Order To Survive in 1993, Compassion Seizes Bed-Stuy in 1995, The Peach Orchard in 1997 and New Communities Of Sound in 1999) and The Little Huey Creative Music Orchestra, a big band of varying size and personnel (Flowers Grow In My Room in 1994, Mayor Of Punkville in 1999, Raincoat In The River in 2001, Spontaneous in 2002 and For Percy Heath in 2005). These were later joined by the William Parker Quartet with trumpeter Lewis Barnes, Rob Brown and Hamid Drake (New Communities Of Sound in 1999, O´Neals Porch in 2000, Sound Unity in 2004, William Parker Quartet in 2007 and Petit Oiseau in 2007) and a quintet with the addition of vocalist Leena Conquest (Raining On The Moon in 2001 and Corn Meal Dance in 2007), as well as many other more ad hoc groups. Parker´s special projects have featured the music of Duke Ellington,Curtis Mayfield and Fats Waller, among others. He has also released solo bass works (Halana in 1993, Testimony in 1994, At Somewhere There in 2008 and Solo Bass in 2010) and performed as a duo with a number of other bassist, including Giorgio Dini, Mark Helias, Peter Kowald, Joëlle Léandre and Alan Silva.

Parker is a prolific composer and has composed everything from operas, oratorios, ballets and film scores to soliloquies for solo instruments. To date, he has released over 40 albums under his own leadership.

Parker has taught at Bennington College, New York University, The New England Conservatory of Music, Cal Arts, the New School for Music and Contemporary Music and The Rotterdam Conservatory of Music. He has also taught music workshops in cities throughout the world, from Berlin, Paris and Tokyo to the Lower East Side of New York City.

Parker is a theorist and the author of several books, including Who Owns Music? in 2007 and Conversations in 2011. In addition, he has published three volumes of poetry: Music Is, Document Humanum and The Shadow People. Andrew Cyrille (b. 1939) was born in Brooklyn, New York, into a family with Haitian parents. After graduating from high school, he began studying at St. John´s University with science as his major. However, he was already playing jazz in the evenings and soon switched to the Juilliard School of Music. During his studies at Juilliard and the Hartnett School of Music (1961-64), Cyrille played both with a number of well-established jazz musicians, such as saxophonists Coleman Hawkins and Illinois Jacquet and pianist Mary Lou Williams, and with representatives of modern jazz like saxophonists Bill Barron and Rahsaan Roland Kirk, trumpeter Kenny Dorham and vibraphonist Walt Dickerson as well as with the Nigerian master drummer Babatunde Olatunji. Cyrille is considered one of the most creative and versatile percussionists in modern jazz, equally at home in a modern mainstream setting as with avant-garde music.

Cyrille first began making a name for himself with his 1961 recordings with Coleman Hawkins (The Hawk Relaxes), Walt Dickerson (This Is Walt Dickerson!) and bassist Ahmed Abdul-Malik (The Music Of Ahmed Abdul-Malik). His collaborations with Dickerson in particular continued into the 1980s, resulting in such other classic recordings as Relativity and To My Queen in 1962, Jazz Impressions Of "Lawrence Of Arabia" in 1963, Unity in 1964, Tell Us Only The Beautiful Things and Peace in 1975, and Dickerson´s final recording as a leader, Life Rays, in 1982.

However, Cyrille may still be best known for his membership in the Cecil Taylor Unit, which lasted for over a decade (1964-75), during which he established his position as one of the leading percussionists in freely improvised jazz. Cyrille´s close to ten recordings with Cecil Taylor began with two legendary sessions (Unit Structures and Conquistador!, both in 1966) for Blue Note Records and also included Cecil Taylor´s recording with the Jazz Composer´s Orchestra ("Communications No. 11, Part 1 and Part 2", The Jazz Composers´ Orchestra) in 1968, Nuits De La Fondation Maeght, Volumes 1-3, in 1969 as well as Akisakila and Spring Of Two Blue-J´s in 1973.

Since the 1970s, Cyrille has led or co-led a number of ensembles, including Maono (with trumpeter Ted Daniel, saxophonist David S. Ware, pianist Donald Smith and bassist Nick DiGeronimo et. al.), The Group (with trumpeter Ahmed Abdullah, saxophonist Marion Brown, violinist Billy Bang and bassists Sirone and Fred Hopkins), the percussion quartet Pieces Of Time (with Kenny Clarke, Milford Graves and Famoudou Don Moye) and Trio 3 (with saxophonist Oliver Lake and bassist Reggie Workman). He has released more than 30 recordings as a leader or co-leader, ranging from two solo recordings (What About? in 1969 and The Loop in 1978) and a number of duo recordings (beginning with his duo with fellow drummer Milford Graves, Dialogue Of The Drums, in 1974 and continuing with his duos with saxophonists Anthony Braxton, Peter Brötzmann, Jimmy Lyons and Greg Osby, pianist Irène Schweizer, synthesizer player Richard Teitelbaum, bassist Peter Kowald and drummers Michael Carvin and Vladimir Tarasov, among others) to recordings with larger ensembles. His first recordings as a group leader were with Maono, including Celebration (with Daniel, Ware, Smith, synthesizer player Romulus Franceschini, bassist Stafford James, percussionist Alphonse Cimber, vocalist Jeanne Lee and poet Elouise Loftin) in 1975, Junction (with Daniel, Ware, and Lisle Atkinson) in 1976 and Metamusicians´ Stomp (with Daniel, Ware and DiGeronimo) in 1978. These were followed by Nuba (with Jimmy Lyons and Jeanne Lee) in 1979, Special People (with Daniel, Ware and DiGeronimo) in 1980, The Navigator (with Daniel, pianist Sonelius Smith and DiGeronimo) in 1982, My Friend Louis (with trumpeter Hannibal Marvin Peterson, Oliver Lake, pianist Adegoke Steve Colson and Reggie Workman) in 1991, X Man (with flutist James Newton, guitarist Alix "Tit" Pascal and bassist Anthony Cox) in 1993, Ode To The Living Tree (with Oliver Lake, David Murray, Adegoke Steve Colson, bassist Fred Hopkins and percussionist Mor Thiam) in 1994, and Good To Go, With A Tribute To Bu (with James Newton and Lisle Atkinson) in 1995.

Cyrille has been involved in jazz education since the early 1970s and is currently a faculty member of the New School for Jazz and Contemporary Music operating as part of the New School University in New York City.