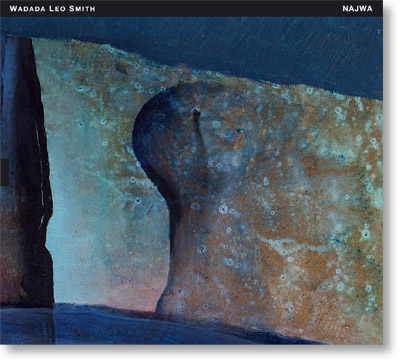 Wadada Leo Smith´s new album Najwa features four compositions in tribute to past masters of creative music, Ornette Coleman, John Coltrane, Ronald Shannon Jackson and Billie Holiday, as well as the title composition "Najwa" in remembrance of a love lost. Compared to Smith´s prior recordings, the presence of four guitarists and Bill Laswell´s electric bass create a unique sound world and fluidity for the music.

01 Ornette Coleman´s Harmolodic Sonic Hierographic Forms: A Resonance Change in the Millennium 16:22 / 02 Ohnedaruth John Coltrane: The Master of Kosmic Music and His Spirituality in a Love Supreme 14:00 / 03 Najwa 03:31 / 04 Ronald Shannon Jackson: The Master of Symphonic Drumming and Multi-Sonic Rhythms, Inscriptions of a Rare Beauty 11:49 / 05 The Empress, Lady Day: In a Rainbow Garden, with Yellow-Gold Hot Springs, Surrounded by Exotic Plants and Flowers 10:01 // Total playing time 55:43

All compositions by Wadada Leo Smith

The first two extended compositions that open the album are dedications to two great masters of creative music, Ornette Coleman and John Coltrane, and each takes the form of a mini-suite. "Each has a second movement within the context of the overall shape," says Smith. "They´re shaped like miniature suites within the context of a single album. And then the whole album has the shape of a tribute. It´s all about people and, therefore, it´s also organically unified, based around these people who I respect."

Next is the brief but touching "Najwa," followed by a dedication to the sometime drummer of Smith´s Golden Quartet, Ronald Shannon Jackson. The CD closes with the achingly beautiful "The Empress, Lady Day," one of Smith´s several compositions dedicated to Billie Holiday. "I´ve written more compositions for Billie Holiday than maybe any other person," Smith says. "She was a great performer/composer."

Although Wadada Leo Smith has worked with electric guitars in the past, including in his Organic ensemble and in Yo Miles! which he co-led with Henry Kaiser, Najwa puts the guitar in an even more central role. All four guitarists have worked with Smith before; Michael Gregory Jackson since Smith´s early years in New Haven in the 1970s, Henry Kaiser in Yo Miles!, and Brandon Ross and Lamar Smith (Smith´s grandson) in Organic.

In addition to the guitars, Bill Laswell´s electric bass takes a central role in the sonic world of Najwa and Laswell also played an important part in the post-production and mixing of the music on the album. Smith says that he enjoyed "the idea of making this session and then going back and re-recording some of the areas and then sitting down with Bill and allowing him to tweak it in certain ways and re-reference it in a whole different way. I very much like that notion, that idea or that philosophy." This was the first time Smith and Laswell recorded together but their collaborations have continued both live and in the recording studio.

Wadada Leo Smith (b. 1941), who was part of the first generation of musicians to come out of Chicago´s Association for the Advancement of Creative Musicians (AACM), has established himself as one of the leading composers and performers of creative contemporary music. In the late 1960s, Smith formed the Creative Construction Company together with saxophonist Anthony Braxton and violinist Leroy Jenkins and, since the early 1970s, he has mostly led his own groups, which currently include the Golden Quartet, the Great Lakes Quartet, Mbira, Organic and the SilverOrchestra, among others. In 2012, Smith released his most extensive recording to date, Ten Freedom Summers, a four-CD collection which was one of three finalists for Pulitzer Prize in Music in 2013. In 2013, he released Occupy The World (TUM CD 037-2), a two-CD recording of six extended compositions performed by Smith with TUMO, a 22-member improvising orchestra. The Great Lakes Suites (TUM CD 041-2, a double-CD with Henry Threadgill, John Lindberg and Jack DeJohnette) was broadly hailed as one of the top albums of the year in 2014 as was the duo recording with bassist John Lindberg, Celestial Weather (TUM CD 046), in 2015. In 2017, Smith received awards for Jazz Artist of the Year, Jazz Album of the Year (for America´s National Parks) and Trumpeter of the Year in DownBeat´s 65th Annual Critics Poll and was named Musician of the Year by the Jazz Journalists Association.