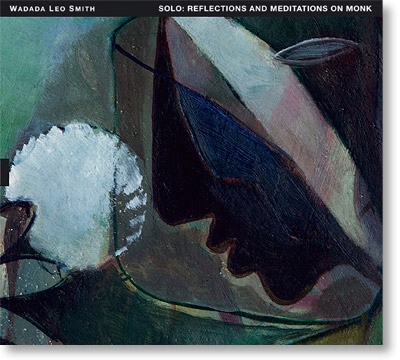 "Most people would never realize that I am closer to Thelonious Monk than to any other artist," says Smith. "What connects us is a vision of composition and its forms, music psychology, and our articulation of the ensemble as a trashing field for new information." From the time he listened to the early masters of modern jazz as a teenager, Smith felt that "It was Monk, his ideas of a band and composition, that were the closest to what I dreamed of being as an artist. His history of composition and his knowledge of how to use sound were a prime motivator, really, for me wanting to be a composer. I would go back and forth between him and Duke Ellington on this, but Monk had the upper hand in the end."

Smith´s fascination with Monk´s solo recordings began more than five decades ago, when he purchased the recording Thelonious Monk Alone In San Francisco. "The essence of Monk is, I believe, in his solo performances"says Smith. "All those pieces, the solo music, follow the primary formula of the compositions, but they all stray, they all lead to expansions and further explorations - allowing the compositions to grow and become renewed each time he plays them. The way in which I play Monk´s melodies on this recording, they are all personal: they are not based on chord progressions, they evolve essentially by proportion - long notes, short notes. Each of them is played, they move, in a way in which I can celebrate his melody, but seen through my expression of it."

In addition to four classic Monk compositions, "Ruby, My Dear," "Reflections," "Crepuscule With Nellie" and "'Round Midnight," the album includes four new compositions by Smith inspired by Monk and his personal history - whether real, imagined or dreamed. Together, the pieces form a unique collection wherein the two composers seem to communicate with each other through Smith´s solo performances.

Smith´s first recording as a leader was also a solo album (Creative Music-1 in 1971). Since that time, he has continued to perform solo concerts and record additional solo albums (Solo Music/Ahkreanvention in 1979, Kulture Jazz in 1992 and Red Sulphur Sky in 2001). Solo: Reflections And Meditations On Monk is, however, Smith´s first solo recording that includes another composer´s music. Smith has also begun performing Monk´s compositions live for the first time.

Wadada Leo Smith (b. 1941), who was part of the first generation of musicians to come out of Chicago´s Association for the Advancement of Creative Musicians (AACM), has established himself as one of the leading composers and performers of creative contemporary music. In the late 1960s, Smith formed the Creative Construction Company together with saxophonist Anthony Braxton and violinist Leroy Jenkins and, since the early 1970s, he has mostly led his own groups, which currently include the Golden Quartet, the Great Lakes Quartet, Mbira, Organicand the SilverOrchestra, among others. In 2012, Smith released his most extensive recording to date, Ten Freedom Summers, a four-CD collection which was one of three finalists for Pulitzer Prize in Music in 2013. In 2013, he released Occupy The World (TUM CD 037-2), a two-CD recording of six extended compositions performed by Smith with TUMO, a 22-member improvising orchestra. The Great Lakes Suites (TUM CD 041-2, a double-CD with Henry Threadgill, John Lindberg and Jack DeJohnette) was broadly hailed as one of the top albums of the year in 2014 as was the duo recording with bassist John Lindberg, Celestial Weather (TUM CD 046), in 2015. In 2017, Smith received awards for Jazz Artist of the Year, Jazz Album of the Year (for America´s National Parks) and Trumpeter of the Year in DownBeat´s 65th Annual Critics Poll and was named Musician of the Year by the Jazz Journalists Association.