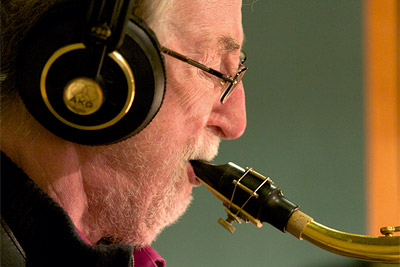 Although Antti Hytti and I had occasionally played together in the 1970s, that had been in the context of free improvisation. I only came to appreciate Antti´s personality as a composer when he started involving me in his film and theater projects beginning in the early 1980s.

Since then, I have been fascinated by Antti´s compositions. They have a particular sense of melancholy or longing that really touches me. I feel that although Antti is of a different generation, his compositions reflect feelings that we share. There is an anguish in his music that I recognize - a mark of a life lived. Although strongly emotional, his compositions are also always intelligent and well thought out.

Like me, Antti is a storyteller. There is also a strong visual component to his compositions perhaps because so many of them were originally composed for a film or a play. You can sense the mood or effect that he is looking for in his music. I have a feeling that when playing his music, I too become a spectator looking from the outside in.

Although very Finnish of course, Antti´s music is also truly global. His background is in world music and in improvised jazz of the 1960s, particularly the strongly spiritual improvisers like Pharoah Sanders, which gives it a universal flavor.

This recording of Antti´s music was under consideration for a long time, but finally came together with ease. Because of the strong melodies, I wanted to expand my regular quartet with Iro Haarla, Ulf Krokfors and Reino Laine by adding two musicians from younger generation: a second bass player, Ville Herrala, and a percussionist, Tatu Rönkkö. This extended quartet created a rich rhythmic carpet for me and others to improvise on. The richness of the background also gave me an opportunity as a soloist to push myself further.

I feel that the music on this recording has a real sense of working together and listening to each other. Not a lot of planning or talking was involved, but when we started playing, everybody stayed focused - listened and reacted - with results that I am proud of.

That is the real freedom in music - everybody just relying on their own instincts in a constant interaction with the others.

I first got to know Juhani Aaltonen through Edward Vesala sometime in the mid-1970s when I was still studying at the Sibelius Academy in Helsinki although I had, of course, known of him through various recordings and the media well before that.

Juhani and Edward took me - a young novis of a bass player - under their wing and guided my way in the world of music towards the direction of free improvisation. We often practiced together in Edward´s legendary basement rehearsal room in Helsinki´s Kurvi area. Often, the late Pekka Pöyry also joined us on the soprano saxophone and the alto clarinet. Others would sometimes also participate, as it was not uncommon for musicians to just drop by the Kurvi rehearsal room. During that time, I also played a lot of what later became known as "world music" and soon realized how much we had in common in our musical expression. It was an unforgettable experience for a budding musician like myself to try out my skills with these fine musicians who were so much more advanced than I.

We did not play much else than completely free improvisation, which gave me a whole new perspective into group interplay. Juhani, Edward and I also did a few trio gigs together although our trio never became a regular performing band.

Little by little, Edward Vesala involved me in some of his studio sessions, particularly radio recordings, and Juhani was naturally always involved in Edward´s projects in those days. During this period, I also participated in a recording with the drummers of the Senegalese National Ballet, which Edward organized and which featured Juhani as the soloist. The resulting album was published under Juhani´s name on Edward´s Leo Records (Springbird). Finally, I became a member of the Tomasz Stanko - Edward Vesala Quartet for a three-year period in the end of the decade.

After those early years, my emphasis shifted more towards composing and, in the late 1970s and early 1980s, I began producing film and theater music with ensembles of various shapes and sizes. For these sessions, Juhani was almost always featured as a saxophonist and/or flutist together with one of his students, Jone Takamäki, with whom I had played in the Jone Takamäki Trio. We worked together on my music for a number of movies, short film, documentaries and theatrical performances, some of which also formed the backdrop for compositions featured on this recording.

At the beginning of the new millennium, I asked Juhani to join Suhkan Uhka, a slightly larger group that Jone Takamäki and I had founded with a number of our contemporaries, although Juhani was then already in the process of retiring from active music-making. Somewhat to our surprise and to our great pleasure, Juhani, after initial resistance, agreed to join and was featured on our recording (Suhka, TUM CD 001). Beginning with Suhkan Uhka, we then had an opportunity to collaborate again after a hiatus of a few years. Perhaps I can also take some credit for the revival of Juhani´s career as an improviser, as he then founded a new trio with two other members of Suhkan Uhka, bassist Ulf Krokfors and drummer Tom Nekljudow, and, as they say, the rest is history.

Juhani has been a very important partner for me throughout my musical life and has molded my career in his own subtle ways. I do not believe that I would be the person or composer that I am today without Juhani´s influence.

For me, it has been a great privilege to observe Juhani devoting himself to these old musical themes of mine and interpreting them in his own unique manner for this recording.

Reminiscence (Muistelo)(Antti Hytti) was one of the first ballads that Antti Hytti composed. The theme is part of an extended composition that was originally composed for the Tomasz Stanko - Edward Vesala Quartet in the late 1970s. According to Hytti, "Reminiscence" was composed looking back at a love affair that had then already ended.

Kukunor (Antti Hytti) was composed as the theme song for Kukunor, a short film by Heikki Partanen and Riitta Rautoma (1988), and featured Juhani Aaltonen as the flute soloist also for the film music. The short film, which was based upon a poetic fairy tale for human children by Lauri Viita (Kukunor, 1949) and tells the impossible love story between two troll children, Kukunor and Kalahari, one of whom is a reflection of a desert and the other of a lake. "Kukunor" was also recorded by Suhkan Uhka (Suhka, TUM CD 001, in 2002).

To Future Memories (Dedicated to Jussi Kylätasku) (Tuleville muistoille)(Antti Hytti) was composed by Antti Hytti during the night after he heard from his close friend, author Jussi Kylätasku, that Kylätasku was going to die of cancer.

Hiisi (Antti Hytti) was composed as part of the music Antti Hytti and Jone Takamäki composed for the short film Pre Kalevala by Riikka Poulsen and Raimo Uunila (1997). The film was a study of the pre-historic mythology of Finnish people. In Finnish folklore, Hiisi could either be a holy being or a special holy place, where you could connect with the higher powers in nature. At times, Hiisi could be mean or threatening. There is an old curse still used in the Finnish vernacular, "Hiisi vieköön", which is a threat that, if you do not behave, Hiisi may take you to the nether-world.

Ursula (For the Polish ladies)(Antti Hytti) is the theme song for a movie by the same name by Jaakko Pyhälä (1986). It is dedicated by Hytti to Polish women in fond memory of the times he spent in Poland, particularly when he was a member of the Tomasz Stanko - Edward Vesala Quartet.

All The Birds (Kaikki linnut) (Antti Hytti) was originally a song composed to a poem by Katri Vala about working-class children summering in Helsinki in the 1930s (Kesä Sörnäisissä, 1934). Later, it developed into a new instrumental version when played by Roommushklahn.

Haze (Usva)(Antti Hytti) also comes from the music composed for the short film Kukunor. It is akin to the unison themes favored by Edward Vesala in his music with strange and unexpected visions leading the listener to an unknown world.