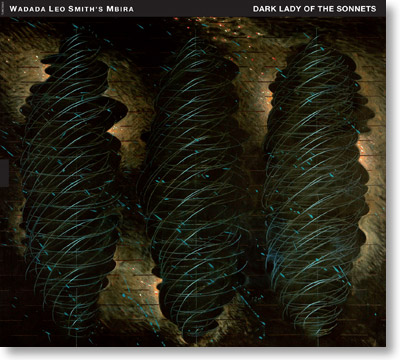 Wadada Leo Smith's Mbira is an ensemble that works within the idiom of American creative music but also in the realms of the Mbira music of the Shona culture in Zimbabwe and even traditional Chinese music. With pipa player Min Xiao-Fen and drummer Pheeroan akLaff, Wadada Leo Smith has produced an album that is powerful and instantly captivating, ancient and contemporary at the same time. Dark Lady of the Sonnets contains five compositions by Smith, ranging from a memorial for his late mother Sarah Bell Wallace to the title-track inspired by the great Billie Holiday.

Trumpeter, composer and improviser Wadada Leo Smith, whose roots are in the Delta blues and who was part of the first wave of musicians to come out of Chicago´s AACM, has established himself as one of the leading composers and performers of creative contemporary music. As a trumpeter, Smith considers himself a descendant of Louis Armstrong, but Miles Davis and Don Cherry also had a profound effect on him as a young musician. In the late 1960s, Smith formed the Creative Construction Company together with Anthony Braxton and Leroy Jenkins and has mostly performed with his own groups since the early 1970s.

Smith currently leads four principal ensembles: Mbira;the Golden Quartet, his highly celebrated quartet that now includes Anthony Davis, John Lindberg and Pheeroan akLaff; Organic, a larger group that utilizes an instrumentation consisting primarily of electric strings; and the Silver Orchestra, which explores his music for a large ensemble. Smith has also received critical and popular acclaim for Yo Miles!, an ensemble he co-founded in 1998 with guitarist Henry Kaiser to perform long suites developed from original Miles Davis themes from his electric period, circa 1973-75.

Min Xiao-Fen, an internationally known virtuoso on the pipa, the ancient Chinese lute-like instrument, has a background in Chinese classical music. In the past decade or so, she has also established herself as a member of the improvised music community in New York City. Recordings with the likes of Derek Bailey, Randy Weston, John Zorn and even Björk have proven that Min, born and educated in Nanjing, China, is one of those rare artists who have mastered the music of her tradition and also the creative music of modern times. She leads or co-leads a number of groups including the Blue Pipa Trio, Min Xiao-Fen´s Traditional Chinese Women String Ensemble, the Asian Trio and Min-Wu-Xu.

The Detroit-born master drummer Pheeroan akLaff and Wadada Leo Smith have a mutual musical history dating back to the mid-1970s and Smith's New Dalta Akhri ensemble. AkLaff has since worked with Anthony Braxton, Don Byron, Anthony Davis, Jay Hoggard, Oliver Lake, Sam Rivers, Cecil Taylor and Henry Threadgill, among others. Throughout the years, akLaff has also had an interest in combining drama and dance with music, including in his "Frederick Douglass Chronicles", which uses the words of the 19th Century statesman; the Brooklyn Mime Troop;and poet Amiri Baraka´s Blue Ark and Speech Music. Recently, akLaff has also performed with Smith´s Golden Quartet and Organic, Byron´s New Gospel Quintet, Hoggard´s Afro-Garibbean Ensemble and Mixed Erato (his duo with pianist Qi Liu).

Dark Lady of the Sonnets is released to coincide with the celebration of Wadada Leo Smith´s 70th birthday at the Roulette Theater, in Brooklyn, New York, on December 15 and 16, 2011. In connection with these two concerts, Mbira as well as five other groups led by Smith (String Quartet Plus,the Golden Quartet, the Golden Quintet, Organic and the Silver Orchestra) will perform.