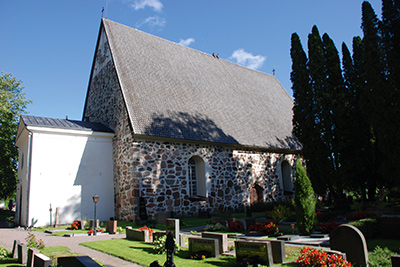 Trumpet was recorded over one summer week at St. Mary´s Church in the town of Pohja, on the Southern Coast of Finland. It is the only building to have survived to serve as a reminder of the town´s medieval history along the King´s Road, the main road from Norway and Sweden via Finland to Russia for several centuries.

St. Mary´s Church was built between the years 1460 and 1480, largely by local parishioners led by foreign experts. A total of 8,500 stones, 40,000 bricks and 24,000 wood shingles were sourced locally and finished with hand tools for use in its construction. It was one of the approximately 100 stone churches built in Finland between the late 13th century and early 16th century, following Finland´s annexation to Sweden and its gradual conversion to Christianity beginning in the late 12th century.

Although St. Mary´s Church has been repaired and, to some extent, modernized at various times over the centuries, particularly after the occupation and plunder of Pohja by Russian troops during the Great Northern War of 1700-1721, it continues to serve the people of Pohja in essentially the same manner as it has for nearly 550 years.