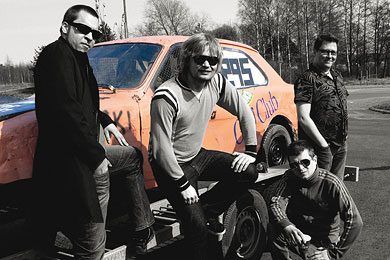 One day, the composer got sick and tired of the way things were and climbed up a tree.  He stayed there for so long that eventually he could not remember the reasons for climbing up in the first place. Thus, he decided to climb down.

Back on the ground, three questions came to him: what is the reason for being here, what is there to be done about it and how can one share the experiences up there with the others down here?

"I must say I´m a bit embarrassed about my behavior last night. It´s not fair to the others for someone to have as much fun as I did then. My apologies."
"You sure were having fun for the rest of us too!"
"Such a marvelous saxophone player!"
"?"
"I wonder if any audience will show up tonight."
"Probably not that many people. They should have done some more advertising. Local newspapers - even the free ones, local radio stations"
"Wasn´t he there with you on that big band tour a few years ago?"
"No, I don´t think so. Who´s that old man sitting there on the corner? I´m sure I´ve seen him before."
"I think he´s actually a she. She´s got that maternal aura on her. And the curve of her neck is definitely feminine."
.
"and the same for me too, please."
"No, no, no, wait! I´ll have a glass of the house white with soda."
"He might actually be Lithuanian. I don´t know. It´s so easy to get mixed up with all those L-countries. Can you bring me a beer, please."
"Dennis, Dennis, my old tennis pal."
"Hey, wait up. Since you´re going to the bar, could you bring me a gin and tonic. And a pint of water with two ice cubes in it. I don´t like it when they put too many ice cubes in my water. Actually you owe me 6.50 from Thursday night. That should settle it."
"Do I look like I´ve got 5 hands? Go and get it yourself."
.
"I really think we shouldn´t start with Paa-da-pap tonight. Isn´t there any other tune we could start with?"
"I don´t know. I just finished making the set list. It´s a lot of work, you see. I wouldn´t like to start doing it all over again."
"Yeah, I know, but just to change the opener"
"It´s like a game of domino or something. Everything affects everything. When you´ve built the foundation of a house, you can´t change it anymore without tearing it all down. Music is pretty much like growing a tree or taking care of a pet. You need to"
"Did you put the music for Adler on the floor tom-tom? I can´t see it anywhere."
"Oh, I must have forgotten it in my bag at the backstage again. Let me go and get it for you. Anything else you need?"
"No, I don´t think so. That should do it. Well, I´m not sure if I´m able to read it anyway. But please, go and get it if you can."

Attac
"Modern day knights fighting against the invisible windmills of the global market forces. Dedicated to Seb, Nicolas and Cedric." Innanen plays the first solo on the alto saxophone followed by Lassy on the baritone saxophone.

The Grey Adler Returns (Harmaan Adlerin paluu)
"You might want to think that the days of the grey Adlers are long gone. But can you really say that your heart doesn´t get soft of happiness and your hands moist of enthusiasm when you hear that familiar clicking sound of a grey Adler?"
Innanen is heard on the baritone saxophone and Lassy on the tenor saxophone.

Knuf-Aharupa
"On April 1, 1889, Fitsidihana Aharupa, the crown princess of Madagascar, and Hans Albert von Knuf, a German noble man, gave birth to Albert von Knuf-Aharupa, a boy whose sole accomplishment in life was to have a rather peculiar family name. The twists and turns of the performance follow the strange and tragic life story of Knuf-Aharupa."
Innanen plays the first solo on the alto saxophone followed by Lassy on the tenor saxophone.

Berber
"I have never been to Northern Africa, but this composition is about my idea of it.
Berber was released for the first time on Sudden Happiness by Triot with John Tchicai (TUM CD 008) in 2004. The general idea of the arrangement is still the same; the biggest difference to that earlier version can be found in the grooves behind the solos."
The first themes are played by Innanen on the alto saxophone and Lassy on the tenor saxophone. Lassy plays the first solo on tenor saxophone followed by Innanen on the baritone saxophone. The last themes are stated with both Innanen and Lassy playing the baritone saxophone.

Paa-da-pap
"Composing Paa-da-pap was a very therapeutic experience for me. "
Innanen plays the alto saxophone and Lassy plays the flute.

Striptease
"This one is dedicated to my sister." Innanen is heard on the baritone saxophone and Riippa on the drums whereas Lassy and Kantonen provide the voices and hand claps.

Tiller Waltz
"Tiller Waltz was composed by an almost forgotten Finnish jazz pioneer Arthur Wilhelm "Willy" Augenstern (1904-?, born as Artturi Wilhelm Armas), who had a strong presence on the Berlin music and cabaret scene in the 1920s and the 1930s. Augenstern composed an impressive amount of music during those turbulent years - unfortunately, most of it having been lost from posterity. As a composer, he was much ahead of his time as you can hear in the bi-tonal harmonies of this composition."
Innanen plays the soprano saxophone and Lassy plays the flute.

Busukas
"Busukas is a story of a group of three ragged Finnish tourists - wearing shorts and dirty t-shirts and carrying very ugly plastic bags filled with souvenirs - trying to blend in at the most chic forró club in Salvador, Brazil. Dedicated to Markus and Esa."
Innanen plays the soprano saxophone and Lassy plays the flute.