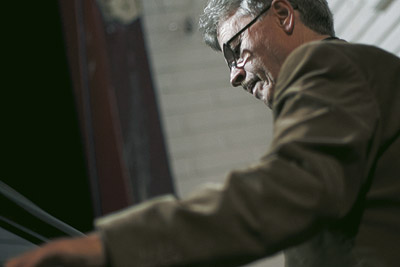 The first sound is irrevocable. A moment ago, it did not exist. Now, it is already in the past. The sound begs for growth and continues onwards. My passion is to paint space and time on paths into the unknown, suggested by sounds. Free improvisation processed as a solo is like a train ride for me: rational, tending towards the chaotic, but, despite swaying on the tracks, it arrives at its destination. I usually get off at a stop I had not planned on. Music passes through a space of time that cannot be equated to the kind measured by the hands of a clock. For me, central to improvisation, or composing, is my trust in my own intuition.

Stella Nova is a collection of wondrous voyages born out of nothing, which I have chosen from a number of improvisations during two days spent in the studio. I have let the current carry me. I have experienced intimate coexistence in the company of a humane, creature-like Steinway & Sons grand piano. The grand piano to me is a giant orchestra of the mind, with which I can beam magic into the ether.

This album is dedicated to Pirjo.

All compositions on this recording are spontaneous improvisations by Esa Helasvuo, except for the classic Finnish tango "Satumaa," which was composed by Unto Mononen. A few of the improvisations were based upon pre-existing themes or concepts but most were created in the moment. The following includes Helasvuo´s personal reflections on each composition.

To Feel You Is To Love You (Esa Helasvuo)
is a love story in the moment. The very first note triggers an inner song to which the listener can provide his or her own life´s narrative.

Stella Nova (Esa Helasvuo)
is an astral observation quickly becoming to focus. Worldwide, we are living in a new age explosively rushing into the future. In this improvisation, I approach the grand piano as an aural representation of the universe. Chaos, order and chaos again follow one another in spheres and timelessness. Nothing is eternal.

Intimacy (Esa Helasvuo)
is an encounter where beauty is condensed into your mind´s restfulness and peace.

Kisumu (Esa Helasvuo)
is a city in Kenya on Lake Victoria. I have twice had memorable experiences in that city. Miles Davis of the late 1950s was in my mind when I began to seek harmonies for this improvisation. The seemingly random and even chaotic, yet intelligently churning, life of this African city reflects both the despair and the hopefulness of its people while making you most susceptible to its sensitive touch. "Kisumu" is a modest representation of an outside observer´s view of the reality of this life, something deeper than we in the Western world are able to realize.

Boa Noiti Meu Amor (Esa Helasvuo)
was already included on my 1976 recording with Edward Vesala, Q. Dreams are the most important treasure trove that we humans have. They have a more significant meaning for our mind´s pyramid than reality does. In our home in the 1970s, the toilet door offered an opportunity for free speech. A pen was hung on the door to encourage both guests and members of the household to write down their own words of wisdom on the surface of the wooden door, which had been painted white. Somebody had written the Portuguese words "boa noiti meu amor" on the door. On my Q recording, these words then became the title of a love song in the form of an improvised ballad. This new recording offers a solo piano version of the theme born out of that improvisation.

Satumaa (Fairyland) (Unto Mononen)
is a sensitive composition by Unto Mononen that combines the European song tradition with an effort to reach deep into the Finnish national psyche. The composition, which was first made popular through a 1955 recording by Henry Theel, one of the most popular male vocalists in Finland during the 1950s and the 1960s, is as elegant as a jazz standard and offers equal opportunities for improvised variations. "Satumaa" was part or the regular repertoire of the Seppo Rannikko Orchestra when I was one of its members in the late 1960s.

Figuring Out The Sky (Esa Helasvuo)
is an improvisation that uses the idea of transforming graphic thinking into music as its starting position. Improvisation in this case is more like a visual presentation in a poster than visions of Stella Nova. The colors are black and white. It is more philosophical.

Souvenir (Esa Helasvuo)
was originally composed as the theme music for a TV series called Sydän Toivoa Täynnä (Heart Full of Hope, 1997-99). It is also included, with the title "A Memory," in my collection of sheet music for young pianists called The Return of Honkey Tonk Plink Plonk. It is a small and infectious composition. I have personally always enjoyed improvising based upon clear and simple themes. I seek to use them to bring feelings to the surface. For me, that is one of the main tasks of art.

Blues Addiction (Esa Helasvuo)
represents the blues, which has always been one element in my life. I continue to hold on to its hand. A positive addiction! The blues haunts my music although it does not reach the surface holding the pointer of theory towards you. Year by year, it has moved deeper and deeper into the hidden recesses of my musical mind just like the impressions created by the traditional Karelian rhymes or cattle calls have moved below the surface.