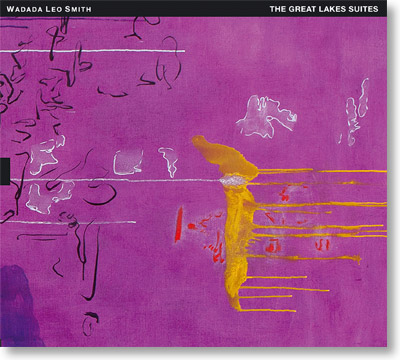 "What attracted Smith to the Great Lakes, he tells us in the booklet that comes with this double CD, was their surface flatness and underlying volatility  restrained, but explosive,´ in his words. He might as well be describing his own trumpet style. Though he can growl and cuss with the best of them... Smith´s brass signature is a dead calm that lets the boldness of his lines sneak up on you." - Francis Davis, NPR Music

4.5 stars. "Smith has a lengthy history with the members of this quartet, and along with this shared history is a mutual sense of how collective improvisation illuminates Smith´s distinctive compositional ideas... It all coalesces with the lyricism that Smith commands from his muted solo." - Aaron Cohen, DownBeat

"The Great Lakes Suites is such a giddying masterwork you wonder why he bothered qualifying his title with the last word - The Great Lakes would have been far better, suggesting sound liberated from the formal burden of being ordinarily musical, which is how this piece communicates its intentions. As tightly unified as Wagner´sGötterdämmerung." - Philip Clark, WIRE

"What a quartet!... Ultimately the greatest lake here is derived from the pool of talent and well-spring of innovations created by Chicago´s AACM alumni and their kindred spirits. These are musicians who understand that spatially oriented jazz requires depth as much as breadth. They have acquired the muscular ears and refined wisdom of knowing the similarities between pausing and digging, and the synergy that ensues when both are diligently deployed." - Britt Robson, JazzTimes

"Five stars. A thrilling program of extended compositions featuring each player in generous detail... This is perfectly balanced music with heavy input between four improvising and interpretive masters - no one dominates but each one consistently soars." - Robert Bush, All About Jazz

Top 10 Jazz Albums of 2014. "A quartet of staggering talents... At 72, Smith has gained untold expressive capacity on his horn - perfect for the vast landscapes of natural beauty he´s imagining." - David Adler, Village Voice

4.5 stars. "Smith has assembled a superstar quartet... The jazz floor is littered with portentously titled suites, but you only need to hear a minute of any of these to feel the power." - Philip Johnson, UK Independent

4.5 stars. "Smith continues to surprise... Smith has an extended relationship with Norway's TUM label and has issued a series of high-quality recordings for them in a variety of contexts. That said, The Great Lakes Suites is the very best of them - thus far - and one of the finest in his long career... The Great Lakes Suites is the most accessible of Smith's recordings. Virtually any modern jazz fan can find a way inside these compositions thanks to the depth of this collective's canny communicative dialogue." - Thom Jurek, AllMusic

"Profoundly compelling, if challenging, music. Smith benefits from the exceptional collaborators onboard, including two major jazz figures - the saxophonist and flutist Henry Threadgill and the drummer Jack DeJohnette - plus the inventive bassist John Lindberg." - Monarch Magazine

Five stars. "Two of the most enduring voices in avant-garde jazz belong to trumpeter Wadada Leo Smith and reedman Henry Threadgill. [The Great Lakes Suites] teams the two icons inside the equilateral quartet that includes drummer Jack DeJohnette and bassist John Lindberg. It sounds like a dream team, and it is... One of the freshest, most original sets of the new millennium." - Dan McClenaghan, All About Jazz

"He's a masterful improviser, full of sonic mirth as well as drama, and an ambitious thinker who has known for decades how to put a band of like-minded artists together. Smith's new set, The Great Lakes Suites (Tum), is another example of why he deserves the attention of all creative music enthusiasts... This is one of the most accomplished jazz recordings released this year." - Bret Saunders, The Denver Post

Five stars. "Smith has created a set brimming with composerly intent, in which meditative calm rubs shoulders with jostling abstraction. Over the 90-minutes running time, Smith allows ample space for everyone, with bass and drums making the moves as much as the horns." - John Sharpe, All About Jazz

"The M word´ - masterpiece - is certainly to be expected in some appraisals of this two disc set by the great avant-garde jazz trumpeter/leader/composer... The four-way interplay of all the musicians is, at times, stupendous." - Jeff Simon, The Buffalo News

"The vision behind The Great Lakes Suite is all Smith´s and a solid addition to his ample legacy, but Threadgill, Lindberg and DeJohnette add to that legacy simply by living up to theirs." - S. Victor Aaron, Something Else

"This music is less about conventional melodies and themes and more about the elemental aspects of the Great Lakes - ebb, flow, waves, storms and the almost primal emotions these stir in many people. The stormy, heartfelt musicianship here alone makes this worth investigating for fans of outside´ musics." - Mark Keresman, JAZZed Magazine

"The leader plays with great clarity, focus, a sound that cuts through the speakers with power and articulation... If you are fan of Wadada Leo Smith's music, The Great Lakes Suites is a must own. Just to hear these 4 master musicians wend their way through this highly charged yet impressively melodic audioscape gives one hope in uncertain times." - Richard Kamins, Step Tempest