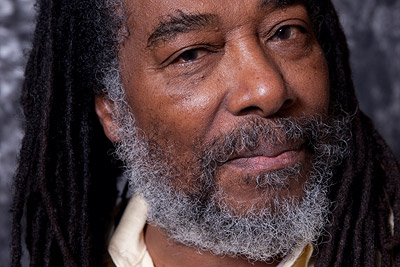 Malachi Favors Maghostut (Wadada Leo Smith) was composed for the great late bassist Malachi Favors Maghostut (1967-2004), who was best known as one of the founding members of the Art Ensemble of Chicago. Favors was one of the first people with whom Wadada Leo Smith played after moving to Chicago in 1967 and the two always shared a special bond, both privately and musically. Favors was often featured in Smith´s groups with the last one being the original version of his Golden Quartet.

He came from the ancient
Pathways, the long Mississippi River,
And through the Nile River in ceremonial Egypt.

He reached across the Far
Eastern kingdoms of
The Xia and Shang-Yin
Dynasties, The Yueh and Qiany of Afra-China.

Maghostut,
The monarch of creative
Music had inherited his
Bass violin from his father.

It is recorded in the
Congressional history of the
Masters that his instrument
Was built with stones and
Ashes from the deep volcanic worlds of
Mt. Mauna Kea
And the celestial Mt. Olympus Mons.

In his solo music the melodic units were constructed with large
Intervals in double octaves.

His playing is completely
Focused.

The rhythmical moments
That he created were
Horizontally knitted perfectly together.

I could see him and as he played his instrument.

His diamond-hands
Glittered with light and sparkled like the stars;
As he plucks and pulls the strings,
Golden rays are dripping from his fingertips.

It uplifted my spirit with
Clear inspirational joy and
Light.

Not before Favors could we
Know such sonic beauty.

Did you hear it?

Can you hear that music,
Did You?

Feathers and Earth (John Lindberg)
was created especially for this duo recording and was completed just a few days before the session.

John Lindberg says that this work, in two parts, serves as an honoring:

"Firstly, of what I think of as the raptor tribe - particularly vultures, eagles and hawks. These are beings I have always felt as close relatives.

Secondly, of the grand organism that supports the life of all the interconnected beings that dwell upon it.

Melodic material from an earlier work, "Ether," was culled and extrapolated for part one, presented here in an altogether different setting, one which features "steaming sonics," lending a searing and soaring quality to this musical narrative.

The aim of presenting an interaction that ultimately springs with joy and hope, while simultaneously being vitally grounded, is at the core of the second part of this work, which closes the compelling journey with depth and grit."