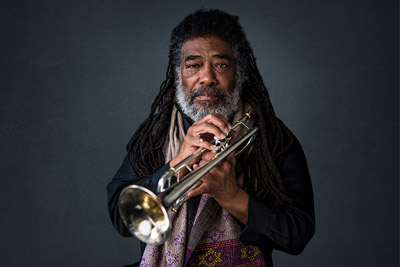 Wadada Leo Smith: "Rosa Parks: Pure Love´ employs the song form as composition to convey a philosophical and spiritual narrative about my vision of Rosa Parks. The oratorio is concerned with ideas and my meditation on the Civil Rights movement, and through lighting, photographs and video images, reconnecting history in the present.

Embedded in the oratorio are excerpts of music of, and performed by, Anthony Braxton, Leroy Jenkins, Steve McCall and Wadada Leo Smith. These excerpts are used as signatures inside of the oratorio. With respect for them, I have embedded snapshots of their work.

In the last few years, I have used the word create´ to best describe what I and my colleagues are doing when we make music in the present moment. The so-calIed improvisation´ is a term that does not express accurately what we are doing. We are musical creators and that activity in the present moment is a creation. That is very much true of the performances captured on this recording of Rosa Parks: Pure Love´."

The staging will be done with lights. The string quartet and the trumpet quartet will be on the opposite sides of the stage, facing each other, and the three singers on center stage.

Min Xiao-Fen sits in a high-structured chair covered with a golden cloth. The voice and the pipa are amplified with contact microphones.

Karen Parks is standing inside a circular spotlight, three feet forward to the right of the center part of the stage.

Carmina Escobar is also standing inside a circular spotlight, three feet forward to the left of the center part of the stage.

RCA microphones that have a solid stand with a round base are used for the other two singers.

January 1967, on my entrance into Chicago, the first musician that I contacted was Anthony Braxton. I went to his house, we played some of Ornette Coleman´s compositions from a book of Ornette´s scores published by MJQ Music. We talked about what was happening in Chicago and with the Association for the Advancement of Creative Musicians.

Later, I encountered Leroy Jenkins and Steve McCall at an AACM meeting.

Shortly after that, Steve McCall left with his family to live in Paris, France.

It was on a bright Sunday morning that Leroy Jenkins and I met at Anthony´s home on the South Side of Chicago.

Leroy and I had only briefly shared conversations before, but nothing in depth. When we met, he looked at me kind of funny and curious as to "who is this guy?"

Inside the apartment, we didn´t do much talking, we just took our instruments out of their cases.

Anthony flipped the "record" button on.

We started to play.

For the first time ever, I could sense from the ensemble chemistry a unique musical bonding which would reveal to us some great moments of music-making and compositional thinking, in theoretical practice.

The music floated out from our instruments without much encouragement from us and naturally the music reached a beautiful experience of musical adventure.

We listened back to the music we had just created; I could see a great excitement in Leroy and Anthony´s eyes concerning the journey that we had just taken.

We were affected in a biggest way with that music and the feeling it gave us.

Immediately afterward, we jumped into Leroy´s car and headed north, a little north of Old Town. There, we entered the second floor apartment of one of Anthony´s friends. We played again.

No music on paper, just music from the heart and mind of three pathfinders laying the way for an ensemble with no "bottom" or "rhythm". That´s what the other musicians would say when they heard us perform.

Lester Bowie, after hearing us, would call us the "slide-rule boys" whenever we came into the AACM meetings. Because we made MUSIC.

That Sunday was the first performance.

We, Braxton, Jenkins, Smith, played in Paris at the American Center. The next day, we were to perform at the Festival "Actuel" in Amougies, Belgium, right across the border of France.

The next morning we took a bus from Paris. In the bus were other musicians, Steve Lacy´s ensemble and other bands, all of us headed to the festival.

(Steve McCall became a member of Braxton, Jenkins, Smith after we went to live in Paris. Steve did not play the last concerts with us; he elected to go to Nigeria to play with Archie Shepp.)

Earlier that day, Anthony had to call the festival organizers, since we heard that the Art Ensemble of Chicago had set a fire on stage and the piano burnt in that fire. The news also informed us that Joseph Jarman in performance wore a red suit, he played a guitar and stripped. The Art Ensemble´s performance was an exposé on rock n´ roll. Maybe, because the Festival "Actuel" had all the major rock bands programmed to perform.

The organizer said: "Don´t come!" and if we did come we would not be allowed to perform nor would we get paid.

We decided to go anyway.

When we arrived, the organizer was still angry but we insisted on playing because we had a contract.

No. We did not get paid.

When we went on stage, there were sixteen to eighteen thousand people, but more like twenty-eight thousand in attendance. We later heard.

Anthony had his instruments and the garbage-cans percussion unit he had designed; he was on the far side of the stage.

Leroy had his violin and viola and was positioned center stage facing the audience.

I was on the opposite side of the stage facing Anthony, with the trumpet and my steelophone percussion unit.

The music started like a grand tsunami with exploration that exploded from all three centers. People were screaming with joy, while others screamed angry insults.

And there were fights.

Between those two opposite attitudes, we elevated our music higher, and higher, with creative inspiration.

Some of the insults transformed into action: the people closest to the stage began to pull up grass with clogs of mud, and they began to bombard the stage with mud-missiles. The music took on the shape of an illuminating Jupiter, it engrossed the complete field of sonic activity.

Braxton, Jenkins, Smith were from the brightest star, Sirius.

We exited the stage amongst boos, but the cheers dominated the space.

Our strut from the stage revealed our victory.

That was next to the last time we played together as a unit in Europe.

Our very last performance occurred at the University of Paris at the Science and Architecture building.

Prior to going on stage, a lady journalist from the radio wanted to interview us as a group. During the interview, she constantly tried to maneuver us into identifying our music as being African music. Each time, we resisted, but more and more vigorously.

Finally, the lady journalist gave up, clicked the tape recorder off and walked away.

Next, we had no idea what awaited us.

The dynamic of a performance always opened up an unpredictable environment. Whatever environmental conditions sprung up in those moments was not new to us, just different, and another episode which we came to conquer.

That night, the auditorium was completely packed from top to bottom, and it seemed like twenty present of the audience had brought bells, whistles and percussive things to play on.

Again, WE started to play and as the music began to evolve THEY came in with their bells and whistles, etc. This time we decided that we would just play through it, but at some point people began to come on stage and act out in very unpleasant ways against what we were doing.

I left the stage.

Not disappointed, nor unhappy, we understood the power of music, and how it affected people´s behavior.

Before leaving Paris to return to the United States, we decided on a collective name for the ensemble. We named it Creative Construction Company. In this way, keeping with our "corporate" tradition. Braxton, Jenkins, Smith.