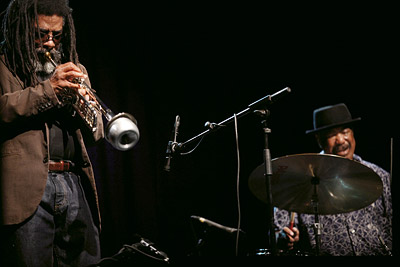 Throughout the West, "griot" is generally used to describe a West African bard, whose stories, praise songs, poems and music serve several vital social functions: they are a repository of local history; they set parameters for gossip, satire and political commentary; and they reinforce everyday celebratory traditions. Every language in West Africa, however, has its own term, each having a resonant etymology. A griot in the northern Mande region is called a "jeli;" "jeliya" roughly translates as "musicianhood" and references the knowledge passed on over centuries. In the southern Mande regions, a griot is referred to as "jali," which is the Manding word for "blood." Wolofs have two words for griots - "géwël" and "ñeeño" - the former also refers to oral history itself. Griots, then, do not simply convey history and traditions. They are the history and the traditions.

Western music communities bestow griot status upon artists who evoke not only an immediate artistic lineage, but also a vast, if vague, diasporic past of ancestors and spirits. While this is quite the opposite of the dynamic between traditional African societies and their griots - they being of such a privileged endogamy that they can insult the ruling class with impunity - the idea that a musician is a vessel for ancient truths and wisdom is extremely potent, particularly in North America where indigenous cultures have been all but eradicated. This idea is necessary for the elevation of music from entertainment or even art to that of ceremony and even ritual; the "little story" to which Lester Young likened an ideal solo turning into an archetypal tale. In this way, musicians become griot-like as the embodiments of a media-based history and traditions that are partly appropriated and partly made from scratch.

Wadada Leo Smith and Louis Moholo-Moholo are towering figures in creative music in large part because they embody powerful, contrasting metaphors for spiritual potentiality. These metaphors are rooted in artistic responses to oppression, their early years being shaped by the hellish conditions of their virulently segregated birthplaces. Smith, born in Mississippi the same year as Emmett Till, grew up near where the teenager´s mutilated body was found in the Tallahatchie River in 1955. As a teenager in Cape Town, Moholo-Moholo was jailed for two weeks merely for being in the wrong part of town at the wrong time of night. Music was their means of escape; Smith wound his way through the South and the Midwest with blues bands and played in Europe with Army bands before landing in Chicago in the heady early days of the AACM, while Moholo-Moholo left South Africa in 1964 with The Blue Notes, settling in London with his comrades after an initial period in Zürich.

Moholo-Moholo´s exile is at the heart of his narrative; yet, the resulting metaphor of spiritual potentiality has a twist. On the one hand, Moholo-Moholo was indelibly shaped by the separation from family, friends and community, and the successive losses of his exile brethren - it is all but impossible to find an interview with him where the latter is not front and center. Decades after the tragic death of Mongezi Feza, The Blue Notes´ trumpeter is still frequently invoked when Moholo-Moholo praise-sings in performance. On the other hand, Moholo-Moholo´s iconicity evolved beyond that of the "Exile" or the "Last of the Blue Notes." He became a diasporic cultural force in his own right; unlike an Aleksandr Solzhenitsyn, whose literary raison d´être ceased with the dissolution of the Soviet Union, Moholo-Moholo´s artistic and cultural relevance increased with the end of Apartheid and his resumption of residency in Cape Town. The fierce, unrelenting will that was at the crux of his resistance to injustice became the metric of his spiritual potentiality.

Smith´s journey can be traced through his writings about aesthetics and methodology. His documentarian values - reflective of AACM practice - underlie his preface to his 1976 method book, Rhythm: a study in rhythm-units in creative music, in which he pays homage to predecessors like George Russell and Ornette Coleman not for their music per se, but for authoring texts about their innovations. The articulation of creative music by its creators is seen by Smith as necessary for creative music to be disseminated without the corrupting influence of what he calls the "powerMAN" in his 1973 collection of essays, notes (8 pieces), source a new world music: creative music. Throughout his writings and his decades-long teaching career, Smith essentially argues that creativity begets creativity, indicating a demonstrative mode of pedagogy.

Subsequently, Smith and Moholo-Moholo represent complementary images of the elder in the international creative music community; the drummer being the Long March veteran, and the trumpeter being the agent of institutional change. Both of them embody a diasporic construct of musical traditions that originated in Africa and, with the accelerant of media, reverberate between Africa and the rest of the world with ever increasing speed. Despite their contrasting histories, Smith and Moholo-Moholo clear the threshold for at least the Western idea of griot status on Ancestors by exemplifying the standards Smith attributed to Russell et al. in his preface to Rhythm: "(T)hey have been so intense in their consciousness as to  expose the inner working laws which are so necessary in governing the working process of creation."

At its most profound, creative improvised music evokes an aura of chthonic knowledge, positing the idea that the music comes from somewhere else - somewhere deep, ancient, and inscrutable to a degree. This gives concepts like "jali" and "jeliya" entrée into a discussion about one of the more ephemeral of art forms. When the improvisers are of the stature of Smith and Moholo-Moholo, the synonymy of the conveyors of tradition and the tradition itself is reinforced; "géwël" becomes a credible descriptor. These traditional concepts live on Ancestors; Wadada Leo Smith and Louis Moholo-Moholo truly are griots, their spiritual potentiality fully realized. 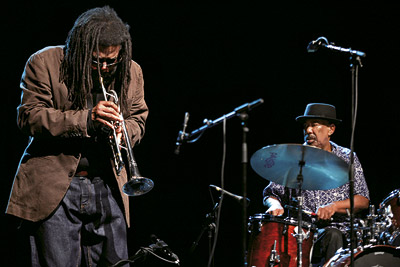 Wadada Leo Smith: Louis Moholo-Moholo is one of the most unusual artists I have ever played with. Louis has created a drumming practice that does not transfer African drumming onto the drum set but, rather, he has developed a drum tradition that did not exist anywhere in the music before he created his own language. His use of space and silence, sonic depth accents and drum rolls that are multi-rhythmical in design, with all of this centered within micro-sonic fields, make him one of a kind.

Wadada Leo Smith: James Baldwin (1924-1987) was the perfect example of an artist as activist. His writings, the essays, novels and plays, are one of the greatest testimonies illustrating the value of human rights. It was because of James Baldwin´s essays that I developed a clear idea of how to frame the social problems in the United States of America, and to realize the responsibility and the position of the artist in our society. Mr. Baldwin and Richard Wright (1908-1960) were the first writers to shape my love for literature.

Wadada Leo Smith: Jackson Pollock (1912-1956) was the first painter to clearly realize how to create his art in the present moment, from the time he began a painting with his action-improvisation to the completion of it. He performed his painting action in the same way creative musicians perform their musical improvisations.

Siholaro (Louis Moholo-Moholo) was composed by Louis Moholo-Moholo in memory of his father Siholaro Moholo (1905-1966), who was born in the diamond-mining town called Kimberley and moved to Cape Town in the mid 1930s. There, he married Dorah "Tootsie" Lulu and had two children with her, Louis and his sister Kgotsie. The Moholos were among the socialites of the day in their community, belonging to various sports and social clubs. Siholaro wanted Louis to study further but Louis had caught the music bug. Still, Siholaro was very proud when Louis won the joint first prize for the best drummer at the Cold Castle National Jazz Festival shortly before his departure to Europe in 1964. Siholaro´s death in 1966, at the age of 61 years, was a major blow to Louis, made even worse by the fact that he was not able to attend his father´s funeral due to the Apartheid situation in South Africa. Years later, he added the second Moholo to his name to honor and remind him always of his father Siholaro Moholo.