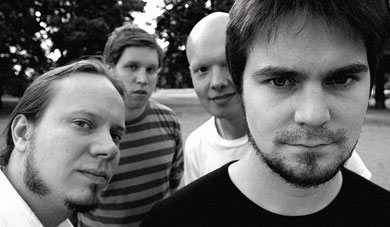 The notes to Ilmiliekki Quartet´s first recording March of the Alpha Males (TUM CD 005), that was recorded in June 2003, already summarized the group´s phenomenal ascent to popularity. Founded in January 2002, Ilmiliekki Quartet won the first prize in the Young Nordic Jazz Comets competition in July 2002 quickly becoming one of the most popular jazz groups in Finland. Around the time of the release of the first recording, in October 2003, Ilmiliekki Quartet collectively was also named the Young Artist of the Year 2004 by Finland Festivals, the umbrella organization for Finland´s most important cultural festivals; in 2004, Verneri Pohjola was named the Musician of the Year by the Pori Jazz Festival and, to top it all, March of the Alpha Males won the annual Teosto Prize awarded by the Finnish Composers´ Copyright Society for the most accomplished musical work recorded during the year 2003.

In its reasoning for choosing Ilmiliekki Quartet as one of the two recipients of the Teosto Prize for the year 2003, the three-member jury stated the following:

"The performers flirt fearlessly with different types of music without concern of losing their street credibility. The compositions cover a broad spectrum between two extremes ranging from sincere pathos to urban edginess. Their audacity is also evident in the open-minded use of structural and tonal solutions that are uncharacteristic of jazz and that can be seen to reflect influences both from art music and from popular song. The bare, at times ascetic, sound breathes courage".

Admittedly, big words for such a young group of musicians having just released their first recording. Also, no small amount of pressure when it comes to recording the group´s sophomore release. Still, these words may well describe Ilmiliekki Quartet and its music even better today than they did at the time.

Credibility and meaning in music are something that the members of Ilmiliekki Quartet very much aspire to. It is not coincidental that this recording is named after, and opens with, a composition by Tom Waits, an artist who is rather hard to beat in this regard. Like Waits, Ilmiliekki Quartet would, first and foremost, like their music to have honesty and meaning that can be appreciated by its listeners. Technical brilliance or playing the coolest licks is not what this music is all about but rather communicating their own deeply held convictions about the music and giving the audience cause and opportunity for reflection. Verneri Pohjola himself says that the quartet´s music "is not music to party to but rather music to think to". Tuomo Prättälä agrees and notes that "Ilmiliekki Quartet´s music is actually not very good as background music. Even at gigs, whether in Finland or elsewhere, we often find that audiences quiet down and focus on the music rather than on chatter which, of course, is very gratifying for us as musicians". Even though that may sound a little serious, there is no need for alarm. There is also quite a bit of humor in this music, both when heard in its recorded form and when heard live.

Since the release of March of the Alpha Males in 2003, the members of Ilmiliekki Quartet have come to be increasingly in demand on the Finnish scene for improvised music, although three of the four are supposedly still full-time students. They all play in too many groups to be mentioned here and are also increasingly emerging as composers and leaders in their own right. Just by way of a few examples, Verneri Pohjola often performs as a featured soloist, like he did at this year´s Tampere Jazz Happening when the UMO Jazz Orchestra performed compositions by Iro Haarla; Tuomo Prättälä is currently getting ready for the release of his first solo recording on which he is primarily featured as a vocalist; Antti Lötjönen continues to delight the club crowd as the bassist of the ever more popular Five Corners Quintet; and Olavi Louhivuori leads his own Oddarrang ensemble, which has recently published its first recording to critical acclaim, and is getting ready to release his first album as a solo percussionist.

Nevertheless, Ilmiliekki Quartet continues to be the group that its members are most closely identified with. Also, Ilmiliekki Quartet itself continues to move to new areas having, for example, recently collaborated with Meta4, a Berlin-based classical string quartet that is also open to other fields of music, on a program of original music composed by Verneri Pohjola, Tuomo Prättälä and Olavi Louhivuori. Also, in collaboration with vocalist Emma Salokoski, Ilmiliekki Quartet has prepared a program of Swedish traditional songs performed in a manner unlike anything else that you have heard before sounding, well, just like Ilmiliekki Quartet. Wherever they go, the quartet´s highly personal approach to improvised music seems to win over the audiences.

Following the release of March of the Alpha Males, audiences both in Finland and elsewhere have increasingly been exposed to Ilmiliekki Quartet´s music. In addition to Finland, Ilmiliekki Quartet has performed at various European jazz festivals, with highlights including performances at the London Jazz Festival and at Moldejazz in Norway, and, in October 2006, also in New York as part of the Northern Lights Jazz Series presented by Jazz at Lincoln Center. Wherever they go, the quartet´s highly personal approach to improvised music seems to win over the audiences.

During the last three years, all the - still very young - members of the quartet have naturally taken considerable steps forward as musicians but the group has also collectively evolved beyond the fresh and youthful energy of the initial release. At least to my ears, there is a new willingness to take risks and to respond to the moment. Also, where the compositions of March of the Alpha Males presented a fairly set frame for the quartet´s performances, the new material is often more of a launching pad for the unexpected. This is also precisely what you can expect from Ilmiliekki Quartet in the future.