Verneri Pohjola (b. 1977) comes from one of Finland´s most renowned musical families. After having studied trumpet both privately and at the Pop and Jazz Conservatory in Helsinki, Finland, and at the Örebro Music School in Sweden, Pohjola was admitted to the Jazz Department of the Sibelius Academy, Finland´s only university level music academy, in 1999. At the Sibelius Academy, his teachers have included some of Finland´s leading jazz musicians as well as visiting clinicians from the United States and other countries.

In addition to Ilmiliekki Quartet, Pohjola is currently active in a number of other groups, including Quintessence, a popular nu-soul ensemble; Q-Continuum, an offshoot of Quintessence; Suhkan Uhka, the 12-member ensemble featured on Suhka (TUM CD 001); and groups led by pianists Aki Rissanen, Giovanni Guidi and Seppo Kantonen as well as by bassists Pekka Pohjola and Ulf Krokfors. Pohjola has also performed as a soloist with the UMO Jazz Orchestra and Orkestrova and with such well-established artists as saxophonist Anthony Braxton, bassist Anders Jormin and pianist Alexi Tuomarila. In addition to the trumpet, Pohjola plays drums in the post-rock group Silvio.

Tuomo Prättälä (b. 1979) is a versatile musician who is comfortable with many genres within popular music. Prättälä has studied at the Pop and Jazz Conservatory in Helsinki.

In addition to Ilmiliekki Quartet, Prättälä performs with Quintessence, Q-Continuum, MP4 and Huba, which are all popular Helsinki-based groups comprised of contemporaries of the members of Ilmiliekki Quartet. Prättälä is also known as a vocalist and his first solo recording is scheduled for release in early 2007. 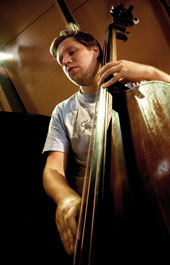 Antti Lötjönen (b. 1980) first studied music at the Music Conservatory of his hometown Kuopio and was admitted to the Jazz Department of the Sibelius Academy in 2001.

Lötjönen is one of the most-in-demand bassists on the Helsinki scene and regularly performs with a number of other groups in addition to Ilmiliekki Quartet, including the Five Corners Quintet, Jukka Eskola Quintet, SUN with trumpeter Kalevi Louhivuori and Olavi Louhivuori, and pianist Alexi Tuomarila´s Finnish-Belgian quartet. Lötjönen also performs with the popular world music ensemble Värttinä. 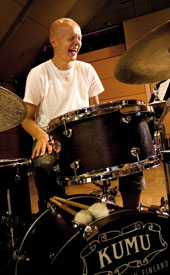 Olavi Louhivuori (b. 1981) graduated from the Jyväskylä Conservatory´s jazz/pop department in 2002 and was admitted to the Jazz Department of the Sibelius Academy that same year.

In addition to Ilmiliekki Quartet, Louhivuori leads his own group Oddarrang, a quintet comprised of cello, trombone, guitar, bass and drums. Louhivuori regularly performs with the trios of pianists Joona Toivanen and Alexi Tuomarila as well as SUN and Olavi Trio, with trombonist Jari Olavi Hongisto and bassist Teppo Olavi Hauta-aho. He has also performed with the UMO Jazz Orchestra and with such well-established musicians as saxophonists Anthony Braxton, Joe McPhee, Jukka Perko and Sakari Kukko, pianists Marilyn Crispell and Samuli Mikkonen, bassist Mats Eilertsen and vocalist M.A. Numminen. Since 2004, Louhivuori has studied composition at the Sibelius Academy with Sonny Heinilä.