A LOVE SONNET FOR BILLIE HOLIDAY 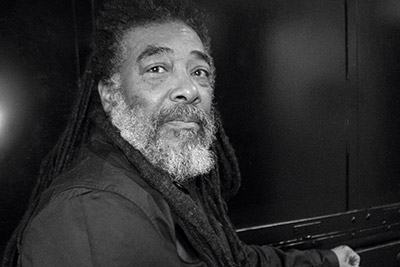 A Love Sonnet For Billie Holiday was a dream project to work on with Jack and Vijay where the idea of composition and instrumentation would play a vital part in how the music sounded.

The keyboards, drum-set/percussion and trumpet would create their own sonic ranges, and with no bass at the "bottom" of the music, Vijay, Jack and Wadada´s instruments could realize wider horizontal sonic fields and emotional ranges. Therefore, the performers could reveal a complete and complex melodic and harmonic spectrum in a clear musical exposition.

This ensemble practice was introduced in the music of Anthony Braxton, Leroy Jenkins and Wadada Leo Smith and first realized in the recordings of 3 compositions of new jazz in 1968 and Silence in 1969. A few questions about forward motion in any given work of creative music.
Is there any?
Does it need to be there?
Must the music feel like it´s moving forward?
If so, what is the motoric mechanism?
Is it indeed mechanical? Technical? A mechanism with timing belt, pistons and valves, camshaft and crankshaft, motivated by a sparkplug?
Is the motor thematic? A program pushed forward by melodic momentum and rhythmic contour?
Or is the music´s engine spiritual? A puff of rarified air blown into an open sail?
The expansion and contraction of spirit functioning like the expansion and contraction of time in swing?
At base, perhaps the real nitty-gritty: is a conventional rhythm section required, the so-called "engine room"?
And: does a drummer need a bassist in order to drive?

These questions seem to pop up from time to time, dividing camps, sensibilities, even within a single artist´s oeuvre. Cecil Taylor in 1966, out on the wobbly rail, poised between Conquistador and Unit Structures, between continuous hard driving and the potentialities of interrupted flow. In the difference between Roscoe Mitchell´s Sound Ensemble and his Space Ensemble. And so much of Anthony Braxton´s oeuvre, toggling between the motoric and a kind of generative stillness, ever since that first outing, 3 compositions of new jazz, together with a young trumpeter named Smith.

In certain corners of the creative music continuum, I hear an approach that functions without automatically slipping into bass-drum-ology, the propulsive component of bop and most of bop´s stylistic progeny. It´s not as simple as asking whether there´s pulsed timekeeping. Time or no time, it´s about the specific type of instrumental relationship, the interaction dynamic that has come to overdetermine our common conception of drums and bass. A propulsive freebop band and a fiery free jazz combo have more in common than what separates them, in terms of momentum. The bassist and drummer come together with an understanding, a shared mission to move things along, to create a trajectory.

What is revealed when one shifts that understanding? Remove the bassist to disrupt the motoric reflex. (Nothing against bassists, mind you; just a way to shake it up.)

Three master musicians, Wadada Leo Smith, Jack DeJohnette and Vijay Iyer, convene to play one another´s compositions, including the tribute to Billie Holiday that lends the disc its title. The Lady Day reference recalls the importance of phrasing. Of applying a supple approach to rhythm, not digging in, not entrenching time. Visualize the openness of a field. Float a melody like a cloud above the meadow. Relaxing like Prez. Or Konitz and Marsh. Let the spirit expand and contract. State a theme and allow it to urge things forward in its own manner, on its own timetable, according to a flexible agenda, relieving any need for engine room propulsion.

Things here move without being pushed.

This is creative music without fossil fuel. Wind power - Wadada taps myriad aeolian resources, his lips a veritable turbine, his mute concentrating the charge, the bell stepping up the sound and distributing it like a transmission substation. Solar power - Iyer´s keys like cells on a rooftop, gathering and distributing energy, choice hotspots for the conversion of his imagination into electricity. Tidal power - DeJohnette´s drumming, a planetary force, generating impetus, a gravitational, rotational momentum, toms, snare and kick cresting wave form into cyclical action, cymbals shimmering or crashing, eddying ambiently or forming an irresistible vortex.

Back to the topic of stillness.

In this organic manner of making music, stillness need not be imposed externally. It´s already there, an ever-present potentiality, accessible even in the midst of tumultuousness. Stillness emerges from the music; it is not structurally carved out or laid on top. The false stillness/energy dichotomy is dispelled.

A bright trumpet long-tone, a dyad on electric piano, a lingering fizz on the ride.
Placid.
Still.

The glassy lagoon beneath a squawking kingfisher on the prowl for minnows.