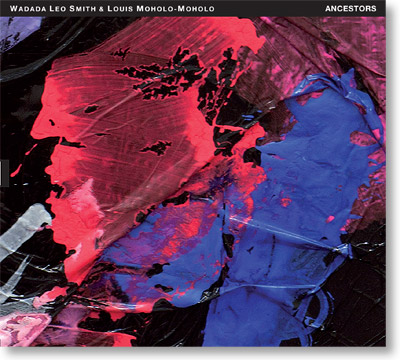 Ancestors by trumpeter Wadada Leo Smith and drummer Louis Moholo-Moholo represents not only the first recorded collaboration between these two master musicians but also a unique meeting of one of the leading proponents of creative improvised music in America with a legendary representative of this music in Africa, its mother continent.

Both Smith and Moholo-Moholo have been leading their own groups for nearly five decades but this recording also continues a long line of duo recordings by each of them, in Smith´s case, particularly with drummers (Ed Blackwell, Adam Rudolph, Günter "Baby" Sommer, Jack DeJohnette et al.) and, in Moholo-Moholo´s case, particularly with pianists (Irene Schweizer, Cecil Taylor, John Law, Keith Tippett, Stan Tracey, Marilyn Crispell et al.). Although the two first played together already in the 1970s and occasionally since that time, this is their first recording together.

Of his duo companion on this recording, Smith says that "Louis Moholo-Moholo is one of the most unusual artists I have ever played with. Louis has created a drumming practice that does not transfer African drumming onto the drum set but, rather, he has developed a drum tradition that did not exist anywhere in the music before he created his own language. His use of space and silence, sonic depth accents and drum rolls that are multi-rhythmical in design, with all of this centered within micro-sonic fields, make him one of a kind."

Ancestors includes two compositions by Smith, one dedicated to Moholo-Moholo and another to the late author James Baldwin, and one by Louis Moholo-Moholo, a moving dedication to his late father, Siholaro Moholo. In addition, the recording features two spontaneous improvisations, one dedicated to the great painter Jackson Pollock and the other a 25-minute long, five-part suite giving the entire album its name.

Trumpeter, composer and improviser Wadada Leo Smith, whose roots are in the Delta blues and who was part of the first generation of musicians to come out of Chicago´s AACM, has established himself as one of the leading composers and performers of creative contemporary music. In the late 1960s, Smith formed the Creative Construction Company together with saxophonist Anthony Braxton and violinist Leroy Jenkins and also collaborated with other key members of the AACM. Since the early 1970s, he has mostly performed and recorded with his own groups.

Smith currently leads four principal ensembles: Mbira, a trio with pipa player Min Xiao-Fen and drummer Pheeroan akLaff (Dark Lady of the Sonnets, TUM CD 023);the Golden Quartet, his highly celebrated quartet that now includes Anthony Davis, John Lindberg and Pheeroan akLaff; Organic, a larger group that utilizes an instrumentation consisting primarily of electric string instruments; and the Silver Orchestra, which explores his music for a large ensemble. In May 2012, Smith released his most extensive recording to date: Ten Freedom Summers, a four-CD collection of compositions inspired by the civil rights movement and recorded by the Golden Quartet/Quintet together with Southwest Chamber Music.

Louis Moholo-Moholo first played with various groups in his native South Africa but became known to the international audiences as a member of The Blue Notes (with saxophonist Dudu Pukwana, trumpeter Mongezi Feza, pianist Chris McGregor and bassist Johnny Dyani) that made their mark particularly on the London jazz scene after leaving South Africa in 1964. In addition to leading his own groups (Louis Moholo Unit, Culture Shock, Spirits Rejoice, Viva La Black, et al.), Moholo-Moholo has performed and recorded with many groups led by other South African exiles, such as Chris McGregor´s Brotherhood of Breath and Harry Miller´s Isipingo, and with many leading American and European free jazz musicians from Steve Lacy and Cecil Taylor to Peter Brötzmann and Derek Bailey.

Moholo-Moholo returned to South Africa in 2005 making Cape Town his home again. In South Africa, Moholo-Moholo leads his own big band, Hear Our Heart´s Vibrations. He also performs with smaller groups made up of fellow South Africans and, mostly outside of South Africa, with the Louis Moholo-Moholo Unit in addition to making special appearances with his surviving contemporaries from the heady days of the 1960s and the 1970s, including Evan Parker, Keith Tippett, Smith and many others.