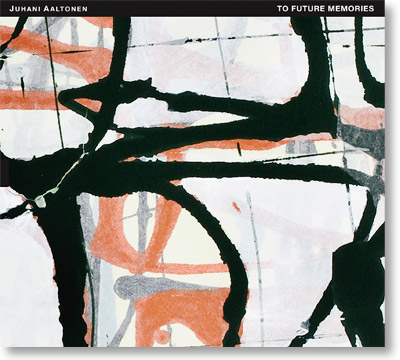 All compositions by Antti Hytti.

On To Future Memories, Aaltonen presents a selection of compositions by composer and bassist Antti Hytti (b. 1952), many of which were originally composed by Hytti for feature movies or short films in the 1980s and 1990s, with Aaltonen featured as a soloist on the original movie versions. The compositions range from the beauty and quiet contemplation of "Ursula", "Kukunor" and the title tune, to the mystical unknown worlds of "Hiisi" and "Haze," as well as Aaltonen improvising at the height of his powers on "Reminiscence" and "All The Birds".

Saxophonist and flutist Juhani Aaltonen (b. 1935) is approaching his 80th birthday, but is in no way showing signs of slowing down anytime soon with his accolade-filled career in improvised music still expanding at a remarkable rate. Aaltonen has long since established himself as one of the all-time greats in Finnish and European modern jazz with his work as a leader as well as his collaborations with Henrik Otto Donner, Heikki Sarmanto, Edward Vesala, Arild Andersen and many others. During the past decade in particular, Aaltonen has focused on leading his own groups, including the Juhani Aaltonen Trio (Mother Tongue, TUM CD 002, in 2002 and Illusion of a Ballad, TUM CD 013, in 2006) and the Juhani Aaltonen Quartet (Conclusions, TUM CD 021, in 2009). He has also continued his collaborations with the late composer Henrik Otto Donner (Strings Revisited, TUM CD 003, in 2002 and And It Happened, TUM CD 039, in 2012) and pianist Heikki Sarmanto (Conversations, TUM CD 024-2, in 2010) and performed with two collaborative trios, one with bassist Reggie Workman and drummer Andrew Cyrille (Reflections, TUM CD 007, in 2004) and the other, Nordic Trinity, with guitarist Mikko Iivanainen and drummer Klaus Suonsaari.

The Juhani Aaltonen Quartet features a top-notch collection of leading Finnish jazz musicians, each of whom has had an important role in Aaltonen´s career. Drummer Reino "Reiska" Laine (b. 1946), like Aaltonen, has a background in the early days of Helsinki´s modern jazz scene, when the small and tightly-knit jazz community was electrified by the visits of giants such as John Coltrane, Eric Dolphy and Elvin Jones in the early 1960s. Aaltonen and Laine are joined by pianist-harpist Iro Haarla (b. 1956), who first performed with Aaltonen in the 1980s in various groups led by drummer Edward Vesala, and by Finland´s leading bass player Ulf Krokfors (b. 1966), who already was a founding member of the Juhani Aaltonen Trio more than a decade ago. Both Haarla and Krokfors have also become known as bandleaders in their own right and for their many projects together.

For the To Future Memories album, the charter members of the quartet are joined by two representatives of the younger generation of Finnish jazz musicians, bassist Ville Herrala (b. 1979) and percussionist Tatu Rönkkö (b. 1983), who are both active in numerous groups with their contemporaries and are among the rising stars in Finnish improvised music.