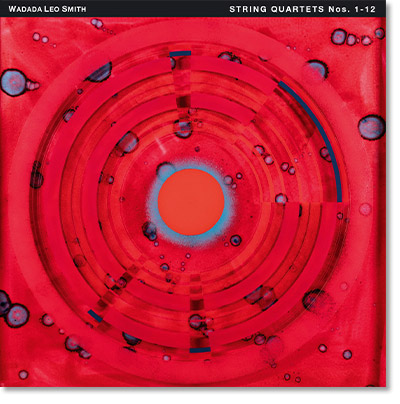 As part of the conclusion of its celebration of the 80th Anniversary of Wadada Leo Smith, TUM Records brings out the most extensive release of Smith´s recorded output to date, String Quartets Nos. 1-12. It is a seven-CD boxed set recorded by RedKoral Quartet and special guests comprising the first 12 of Smith´s string quartets.

String Quartets Nos. 1-12focuses on Wadada Leo Smith as a composer for strings. Smith began work on his first string quartet in 1965 and has composed additional string quartets throughout his career with String Quartets Nos. 13, 14 and 15 having already been completed by Smith after the recording in 2015 and 2020 of the music included in this boxed set. Smith has also featured strings on a number of his other major works, including Ten Freedom Summers in 2011, Occupy The World in 2012(TUM CD 037-2) and Rosa Parks: Pure Love in 2016/17 (TUM CD 057).

String Quartets Nos. 1-12 represents a magnificent addition not only to Smith´s own recorded output but also to the literature for modern string quartet music more broadly. Compositions vary from relatively brief, one-part string quartets of highly evocative and at times meditative soundscapes to the groundbreaking "String Quartet No. 11" that fills two discs with its nine movements.

String Quartets Nos. 1-12was recorded by RedKoral Quartet, including violinists Shalini Vijayan and Mona Tian, violist Andrew McIntosh and cellist Ashley Walters. Violists Lorenz Gamma, Linnea Powell and Adrianne Pope join with McIntosh on "String Quartet No. 12," which is composed for four violas. RedKoral Quartet was brought together by Smith during his tenure at CalArts and was featured on the recording Ten Freedom Summers more than a decade ago and again on Rosa Parks: Pure Love as well as in numerous live performances of Smith´s string quartets and other major works over the past decade.

"The string quartet form and my ensembles have been major vehicles through which I have experimented with musical composition and philosophical ideas about performance and score," writes Wadada Leo Smith in his liner notes. "The ensemble as a unit required developing a language with the opportunity to apply research and dreaming-practice to reshape the terms in each new work I envisioned. My aspiration was to create a body of music that is expressive and that also explores the African-American experience in the United States of America. My music is not a historical account. I intend that my inspiration seeks a physiological and cultural reality."

"When RedKoral Quartet takes the stage, they are focused and extremely prepared and informed about the music that they are going to play," Smith writes. "Their exploration of the score(s) in a performance is precise with clear interpretation and expression. It is a moment to witness and be a part of, a shared musical experience that is beautiful, unpredictable, fresh and cleansing."

The origins of RedKoral Quartet go back to Wadada Leo Smith´s tenure at CalArts in 1994-2013. All but one member of the quartet came within Smith´s orbit at CalArts where they were students and/or teachers. RedKoral Quartet participated in the recording of Smith´s Ten Freedom Summers in 2011 and has since been an integral part of live performances of this major work. The quartet was also part of the public performances and recording of Wadada Leo Smith´s composition "Rosa Parks: Pure Love. An Oratorio of Seven Songs" (TUM CD 053) in 2016-18 and has performed live several of Smith´s string quartets over the years. On May 23 and 24, 2022, RedKoral Quartet will be featured in world premiere performances over two nights of Wadada Leo Smith's String Quartets Nos. 11, 12 and 13 at LAXArt in Los Angeles, California.

Shalini Vijayan is an established performer and collaborator on both the West and the East Coast of the United States. Vijayan was a founding member of Kristjan Jarvi's Absolute Ensemble and of the Lyris Quartet. She performed for over a decade with Southwest Chamber Music and has been a featured soloist with the Los Angeles Master Chorale in Chinary Ung´s "Spiral XII" and Tan Dun´s "Water Passion," including performances at the Ravinia Festival. Recently, she joined Brightwork New Music, an acclaimed LA ensemble.

Mona Tian is a member of the chamber ensemble Wild Up and has performed extensively for Broadway musicals. Tian has performed with a wide range of artists and ensembles, such as Sarah Chang, Martha Graham Dance Company, LA Opera and International Contemporary Ensemble, and can be heard on recordings with Kronos Quartet, the New York Philharmonic and The Industry opera company as well as soundtracks for various films and television shows.

Andrew McIntosh is a Los Angeles-based composer, violinist, violist, and baroque violinist who serves on the faculty of the California Institute of the Arts (CalArts) and performs frequently as a recitalist, recording artist and chamber musician, focusing on early and modern repertoire. McIntosh´s recent commissions include works for the Los Angeles Philharmonic, The Industry opera company, Calder Quartet, Yarn/Wire and violinists Marco Fusi, Movses Pogossian and Ilya Gringolts.

Ashley Walters maintains a uniquely diverse career as a cellist performing music that blurs the boundaries between classical, avant-garde and jazz, breaking new ground in repertoire with microtonality, extended techniques, alternative tunings and improvisation. As a solo artist, Walters has been the dedicatee of significant additions to the cello repertoire and has appeared in concert series and venues throughout the United States. Walters´ debut solo album, Sweet Anxiety, was released in 2017 and features works by Luciano Berio, Nicholas Deyoe, Andrew McIntosh, Wolfgang von Schweinitz and Wadada Leo Smith. As a chamber musician, Walters is a founding member of the Formalist Quartet that has toured in the United States and internationally. Walters joined Wadada Leo Smith´s Golden Quintet in 2016, participating in the recording of America´s National Parks that same year.

Alison Bjorkedal. is a passionate ambassador for the harp, with a focus on new music. She is a Grammy winning musician, who performs, records and teaches in the greater Los Angeles area. As an advocate for contemporary music, Bjorkedal´s notable chamber music performances include the world premieres of works by many renowned contemporary composers. In the studio and on stage, Bjorkedal has performed with a number of world-renowned artists. She has also recorded for a number of motion picture and television productions. Bjorkedal is a member of Southwest Chamber Music, Golden State Pops Orchestra and MUSE/IQUE. She has also performed with the San Diego Symphony, Pasadena Symphony/Pops Orchestra, Long Beach Symphony, Long Beach Opera, Opera Santa Barbara and wildUP, among others.

Anthony Davis (b. 1951) first came into contact with Wadada Leo Smith while studying at Yale University in the early 1970s. Davis participated in two of Smith´s important early recordings as a member of his New Dalta Akhri ensemble and their collaborations have continued ever since. Today, Davis is particularly known for his operas that have often explored people and events from African-American history. Of these, "The Central Park Five" won Davis the Pulitzer Prize for Music in 2020. Davis has also composed a number of orchestral works. Parallel to his work on large-scale projects, he has continued to work as a solo artist and with smaller ensembles. Davis was one of the original members of Wadada Leo Smith´s Golden Quartet and has also participated in the recording and performances of two of Smith´s recent major works, Ten Freedom Summers and America´s National Parks.

Lynn Vartan specializes in solo percussion, concert marimba and orchestral percussion as well as Brazilian, Afro-Cuban and African hand percussion. Her multi-faceted career comprises work as a new music percussionist, as a recital and concerto soloist and as a devoted ensemble musician. Vartan has been actively involved with Southwest Chamber Music, the violin/percussion duo 61/4, which she founded with Shalini Vijayan, the duo percussion group Exacta with Miguel Gonzalez and Duo LinLynn with percussionist Wei Chen Lin.

Stuart Fox plays nylon string, electric and MIDI guitars as well as Renaissance and Baroque lutes and theorbo. He is a specialist in the interpretation of early music on original instruments and is also a leading specialist in the performance of contemporary music. Fox has worked professionally for over 50 years in every area of musical performance. He performs as a soloist and has performed and recorded with the Los Angeles Philharmonic, the Los Angeles Chamber Orchestra and Southwest Chamber Music.

Thomas Buckner is a baritone specializing in the performance of contemporary classical music and improvised music. In his work, he utilizes a wide range of non-traditional vocal techniques. For more than 40 years, Buckner has dedicated himself to the world of new and improvised music. In collaboration with a host of prominent composers and improvisers, Buckner continues to commission and perform numerous chamber works, orchestral pieces and song cycles as well as to engage in improvisation, electronic construction and multi-media theater pieces.