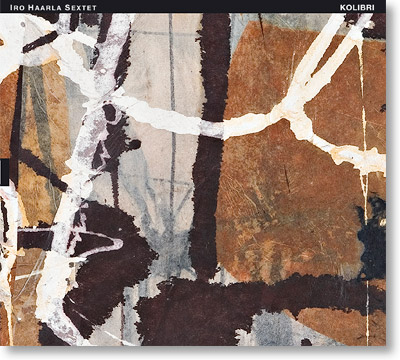 Iro Haarla's Kolibri brings together six of the most respected Finnish performers of improvised music. Haarla has found inspiration for her compositions from nature, particularly from birds and their incredible ability to survive in the world.

Three of the seven compositions on this recording, "Nightjar," "Kolibri" (the Finnish word for "hummingbird") and "Legend of Cranes," are inspired by birds and their life. Pianist Iro Haarla says that "the world of birds has always been close to my heart. It is not only because of the sound world that birds create, although that would be inspiration enough, but also their unbelievable ability to survive in the world despite their delicate appearance." Birds have been a recurring theme in her music going back to Heart of a Bird (TUM CD 004) recorded with Ulf Krokfors in 2003.

The Iro Haarla Sextet was founded in 2009 and performs its leader's compositions, in which Haarla utilizes the possibilities offered by the three-horn front line of the group. For this recording, she has chosen seven unique, multilayered compositions that approach an almost big band like complexity in some of the arrangements.

Iro Haarla says that "I feel that my sextet is somewhere between a small group and a large ensemble and offers similar opportunities for composing as a big band would - equally challenging and satisfying. Adding a trombonist alongside a saxophonist/flutist and a trumpet player provided the presence of all the main horn sections of a big band and expanded the possibilities for rhythmic and harmonic interplay."

Hongisto, Heinilä and Krokfors performed with Haarla already in drummer Edward Vesala´s Sound and Fury in the 1980s and have been her close collaborators ever since. Ounaskari, in turn, belongs to the same generation as Haarla, Heinilä, Hongisto and Krokfors, and was a natural choice for drummer, having been a frequent collaborator of Krokfors in a number of important groups during a period of more than two decades and having also often played with all the others over the years. Together, the five of them represent the finest of their generation and have consistently created improvised music of the highest order both leading their own ensembles and contributing to those of each other.

The "youngster" of the group, Verneri Pohjola, is perhaps the brightest star on today´s creative improvised music scene in Finland. Pohjola has been a founding member of both Haarla´s Finnish quintet and sextet and a favored soloist when the UMO Jazz Orchestra has performed her compositions. He has also participated in various other projects of Haarla.

Iro Haarla (b.1956) first became known for her collaborations with Edward Vesala that began in the late 1970s that continued until his death in 1999, including her membership in Vesala´s Sound and Fury ensemble. Haarla has also collaborated with trumpeter Tomasz Stanko, saxophonists Pepa Päivinen, Tapani Rinne, Trygve Seim and Jorma Tapio, pianist Christian Wallumrød, and percussionist Terje Isungset, among others. In the last decade, Haarla has increasingly performed her own compositions both as a soloist and with her own groups. Haarla´s compositions have also been performed by her groups with Ulf Krokfors, ranging from their duo (Heart of a Bird, TUM CD 004, in 2003) to the Loco Motife ensemble (Penguin Beguine, TUM CD 011, in 2004), and the Juhani Aaltonen Quartet (Conclusions, TUM CD 021, in 2008, with Haarla, Krokfors and drummer Reino Laine) as well as the UMO Jazz Orchestra and other larger ensembles. In addition to her Finnish quintet and sextet, Haarla leads her Norwegian-Finnish quintet that has recorded two albums for ECM Records (Northbound, 2004, and Vespers, 2010). Of her previous recordings, both Penguin Beguine and Vespers have won the Emma award for the best Finnish jazz record of the year.