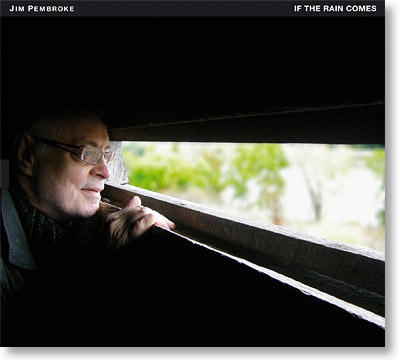 Jim Pembroke
IF THE RAIN COMES

The long-awaited If The Rain Comes represents the return as a solo artist of Jim Pembroke, who first became more broadly known as the frontman of the highly influential Finnish progressive rock group Wigwam. It is his first new release after more than three decades since his last solo album and almost ten years since Wigwam's last recording. The album includes 11 new tracks, all with music and lyrics written by Jim Pembroke, which reflect both today's world and Pembroke's roots in Wigwam, a founding member of which he was 45 years ago.

Born in London, Pembroke now lives in Kansas City in the United States. For the band on the new record he chose both old and new acquaintances. The former include keyboardist Pedro Hietanen, a bandmate in Wigwam since the 1970s, and guitarist Jukka Orma from Pembroke´s Jimbo group in the 1980s. New acquaintances to Pembroke include two of Finland's leading jazz musicians, bassist Ulf Krokfors and drummer Mika Kallio. The recording also features guest artists, such as saxophonist Manuel Dunkel and organist Jukka Gustavson.

If The Rain Comes is dedicated to its producer, the trumpeter, composer and producer Henrik Otto Donner, who already worked with Pembroke on the only recording of Blues Section in 1967 and the earliest recordings of Wigwam as well as on several of his solo recordings. As Donner passed away when the record was being finalized for release in June 2013, it also became the last production of his long career. Donner was also responsible for the string and wind arrangements on the record. The album was mainly recorded at the LA-Audio Studios in Olathe, Kansas.

"I had a long-standing plan to make another solo album with Otto, which finally came to fruition over the last couple of years. I wanted to try double bass on it and Uffe Krokfors first came to mind. I'd met him but never played with him. Same with Mika Kallio on the drums. However, I knew that they both had worked with Otto and thought that things would go smoothly. Then Pedro Hietanen and Jukka Orma liked the idea of coming aboard also, so, we had a great group together. At least on paper, although getting it on tape was still a long story... In the end, everything worked out somehow and the results are now here, hopefully, for the lasting pleasure of the music-loving public. As If the Rain Comes was to be the last recording with Otto it shall, for me, hold a special place in my heart for that reason alone." Jim Pembroke

"When Otto Donner called and asked me to come play on Jim's record in Kansas, I knew right away that I wanted to be a part of it. I was especially happy that Jim was doing another solo album after such a long break. It was also great that the record was being made on Jim's home turf. Nobody had to hurry from the studio to their daily chores and we were in the studio when it felt right, not on the clock. The process was actually a lot like that of recording Wigwam albums. It was a great project!" Pedro Hietanen

"The band Otto put together once again shows his mischievious desire for renewal. Jim's songs have always been a kind of a Barnum & Bailey Meets Americana pastiche for me, with roots deep in the soil of British pop music. Flavoring them with an iconic modern Finnish jazz rhythm section - Krokfors and Kallio - is Otto at his best. It was a joy and a pleasure to be able to be a part of it." Jukka Orma

Jim Pembroke (b.1946) began his musical career in various groups (The Runaways and The Taverner´s Guild) performing in London´s rhythm ´n´ blues clubs of the mid-1960s, but came to Finland already in 1965, first to visit and then to stay. Soon Pembroke had been invited to join a number of local groups (The Boys, The Beatmasters) and also began recording and performing with his own band (The Pems). Most importantly, Pembroke made his mark on the history of Finnish rock music as one of the founding members of Blues Section (with Hasse Walli, Eero Koivistoinen, Måns Groundstroem, Ronnie Österberg et.al.) in 1967 and as the driving force of Wigwam throughout its existence, in both its classic early lineups (with Jukka Gustavson, Jukka Tolonen, Pekka Pohjola, Ronnie Österberg et.al. - Hard N' Horny, 1969; Tombstone Valentine, 1970; Fairyport, 1971; Being, 1974; and with Pekka Rechardt, Pedro Hietanen, Måns Groundstroem, Ronnie Österberg et.al. - Nuclear Nightclub, 1975; Lucky Golden Stripes And Starpose, 1976, and Dark Album, 1977) and its more short-lived later incarnations (Light Ages, 1993; Titans Wheel, 2002, and Some Several Moons, 2005). With these groups, Pembroke began his cooperation with producer Henrik Otto Donner, which also continued on several of Pembroke's consistently well-received solo albums (Hot Thumbs O´Riley: Wicked Ivory, 1972; Pigworm, 1974; Corporal Cauliflowers Mental Function, 1977; Flat Broke, 1980, and Party Upstairs, 1981). Pembroke was also one of the vocalists on Donner´s classic recording En soisi sen päättyvän (1970). Pembroke has mostly lived in Kansas City in the United States since the mid-1990s. There he has worked with local musicians and has occasionally returned to Finland to perform in, for example, Wigwam's newer lineups and also otherwise with musicians already familiar from the Wigwam days.

Otto Donner (1939-2013) is one of the most significant figures in the history of Finnish popular music. Donner was a versatile composer, arranger, musician, band leader and producer, who worked on a broad variety of music throughout his long career, from jazz to popular songs, from rock to concert music and from choral compositions to film scores. He was also one of the founders and leaders of the legendary Love Records label and long active in various important positions in the music industry. Donner also showed his wide musical range as a producer, with the more than 100 records he produced for Love Records representing the entire field of popular music. Along with Jim Pembroke, Donner also realized several important projects with singer-songwriter Dave Lindholm, for example, and produced key recordings for groups and vocalists ranging from the group Tasavallan Presidentti to vocalists Maarit and Pepe Willberg and even actor Tauno Palo.