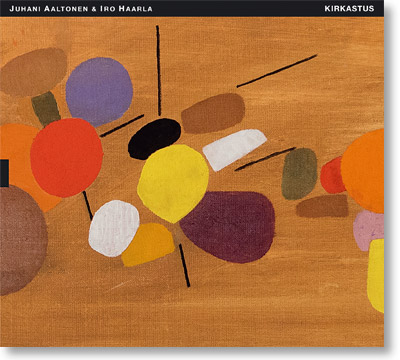 Saxophonist/flutist Juhani Aaltonen and pianist/harpist Iro Haarla first collaborated in drummer/composer Edward Vesala´s various ensembles in the late 1970s and early 1980s appearing on many of Vesala´s most important recordings. Aaltonen, Haarla and Vesala also performed together as the Edward Vesala Trio in 1983.

Aaltonen and Haarla picked up their collaboration when Juhani Aaltonen formed his much praised quartet by expanding his trio in 2008 with the addition of Haarla on the piano and harp (Conclusions, TUM CD 021, and To Future Memories, TUM CD 036). Aaltonen and Haarla have also occasionally performed as a duo but Kirkastus marks their first duo recording and presents a new height for their collaborations.

On Kirkastus, Aaltonen and Haarla play exclusively Haarla´s compositions with the mood ranging from quiet contemplation to powerful crescendos. Most of the compositions were composed specifically for this recording with a number of them inspired by Haarla´s favorite Psalms. In addition to his customary tenor saxophone and flute, Aaltonen also plays the alto and bass flutes that add to the sound world of this recording as do Haarla´s harp and chen that complement her grand piano.

"I have always found playing with Iro to be extremely easy and creative," says Juhani Aaltonen. "Firstly, Iro has such a strong melodic sense in her compositions and in her own playing, that it serves as a perfect starting point for my own improvisations. Secondly, she keeps the music open and leaves the soloist much room for choice. This creates the freedom in music that both Iro and I seek."

"To me, the most important thing about Juhani´s playing is his unique talent in interpreting melodies in an almost heart-breakingly deep manner, always bringing his own individual voice to my compositions," comments Iro Haarla. "Playing with Juhani is almost like being in a natural, relaxed musical conversation where you do not have to think ahead of time, what to say next, as the conversation just continues to flow at its own weight."

Saxophonist and flutist Juhani Aaltonen (b. 1935), who will turn 80 later this year, established his fame on the Finnish and European jazz scene through his collaborations with Henrik Otto Donner, Heikki Sarmanto, Edward Vesala and Arild Andersen, among many others. During this millennium, he has focused on leading his own groups, such as the Juhani Aaltonen Trio and Quartet, releasing several recordings on TUM Records, including To Future Memories (TUM CD 035), Conversations (TUM CD 024-2), Conclusions (TUM CD 021), Illusion of a Ballad (TUM CD 013), Reflections (TUM CD 017), Strings Revisited (TUM CD 003) and Mother Tongue (TUM CD 002).

Iro Haarla (b. 1956) first became known through her work with Edward Vesala, which began in the late 1970s and continued until his death in 1999, including in the Sound and Fury ensemble. During the past two decades, Haarla has increasingly performed her own compositions both as a soloist and with her own groups, of which the most important are the Iro Haarla Sextet (Kolibri, TUM CD 035) and her Finnish-Norwegian quintet (Northbound and Vespers). Haarla´s compositions have also been performed by her duo with bassist Ulf Krokfors (Heart of a Bird, TUM CD 004), the Haarla-Krokfors Loco Motife (Penguin Beguine, TUM CD 011), the Juhani Aaltonen Quartet (Conclusions, TUM CD 021) as well as the UMO Jazz Orchestra and other big bands, among others.