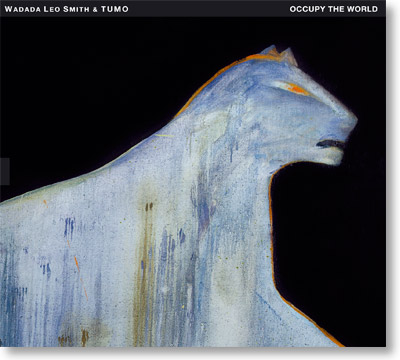 Occupy The World is an instant classic of creative orchestral music. Over five extended compositions, a total of almost two hours of music, composer and trumpeter Wadada Leo Smith leads a new large ensemble, TUMO, to a unique sound world where composed elements meet with strong soloists and group improvisation.

CD-2
04 Crossing On A Southern Road (A Memorial For Marion
Brown)/ 05 Occupy The World For Life, Liberty And Justice

Occupy The World features the legendary composer and trumpeter Wadada Leo Smith with TUMO in its first appearance. The 21-member TUMO, a new improvising orchestra that was assembled specifically for each project, performs five extended compositions by Smith, including "Occupy The World For Life, Liberty and Justice," perhaps his most ambitious recorded composition to date. The four other compositions were also recorded for the first time for this double-CD and include "Queen Hatshepsut," that was inspired by this ancient ruler of Egypt, the first female leader of a major civilization in history; "The Bell - 2," which took Smith´s first recorded composition, "The Bell" (included on Anthony Braxton´s 3 compositions of new jazz in 1968), as its starting point; "Mount Kilimanjaro," a concerto for double bass and a large ensemble that Smith dedicated to its soloist John Lindberg; and "Crossing On A Southern Road," Smith´s moving dedication to the late saxophonist Marion Brown. In addition to the principal soloists, Wadada Leo Smith on four compositions and John Lindberg on one, Occupy The World features trumpeter Verneri Pohjola, trombonist Jari Hongisto, saxophonists Mikko Innanen and Fredrik Ljungkvist, flutist Juhani Aaltonen, pianist Seppo Kantonen, harpist Iro Haarla, accordionist Veli Kujala, guitarists Kalle Kalima and Mikko Iivanainen and drummers Mika Kallio, Stefan Pasborg and Janne Tuomi, among others.

Wadada Leo Smith (b.1941), whose roots are in the Delta blues and who was part of the first generation of musicians to come out of Chicago´s AACM, has established himself as one of the leading composers and performers of creative contemporary music. Already in the late 1960s, Smith formed the Creative Construction Company together with saxophonist Anthony Braxton and violinist Leroy Jenkins and, since the early 1970s, he has mostly performed and recorded with his own groups. He currently leads four principal ensembles: the Golden Quartet, Mbira, Organic and the Silver Orchestra. In May 2012, Smith released his most extensive recording to date: Ten Freedom Summers, a four-CD collection of 19 compositions inspired by the civil rights movement in the United States, which was recently a Finalist for the Pulitzer Prize in Music and has garnered wide praise and accolades.

TUMO, or Todella Uuden Musiikin Orkesteri (in English, the Really New Music Orchestra), is a new large ensemble that performed for the first time at TUMfest12 in Helsinki, Finland, in February 2012 under the leadership of Wadada Leo Smith. TUMO is not intended to become an institutionalized orchestra. Instead, it is a loose aggregation of musicians with a shared interest in creative improvised music, many of them among the leading improvisers in the Nordic region. The musicians performing in this first incarnation of TUMO come from different generations, different backgrounds and even different countries, but are all brought together by their interest in creative improvised music, with most coming from a background in jazz and improvised music and others from a background in classical music. Altogether, in this first appearance, TUMO is a unique, one-time-only meeting of a diverse group of high-caliber musicians.