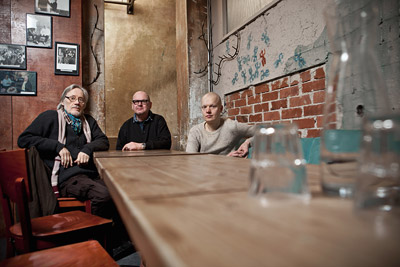 Although the founding of the Olavi Trio more than ten years ago had absolutely nothing to do with the great Finnish tango singer Olavi Virta (1915-1972) - the name of our trio came from the coincidence of us sharing the same middle name - and our music could be seen by some almost as an antithesis of Olavi Virta´s, we find ourselves releasing, for the second time, an album featuring our own, somewhat different take on a song strongly identified with the late master himself.

We consider this appropriate as, even at its most open and improvisational, our music tends to lean towards strong melodies, just as Olavi Virta´s music did. We also feel that, in its dark tones and occasional melancholy, our music reflects the Finnish mental landscape in much the same way as the Finnish tango does and, as we all know, music does not get much more Finnish than that. Apparently, it is true that no Finn - or at least no Olavi - can escape the great man´s shadow.

In order to celebrate the centennial of Olavi Virta´s birth, we proudly dedicate this recording to the memory of our namesake. For its first recording, Triologia (TUM CD 026) in 2008, the Olavi Trio invited three of their friends, saxophonist Juhani Aaltonen, trumpeter Verneri Pohjola and guitarist Kalle Kalima, to join in the proceedings. While these guests contributed greatly to the earlier recording´s variety and artistic success, their prominence also changed the balance of the music and may have left the listener wanting for more of the open improvisation that typically characterizes the trio´s music. There simply wasn´t quite enough of the Olavi Trio. Therefore, this second recording features the Olavi Trio alone in the kind of three-way dialogue in which they engage when performing live.

Oh, La Vie! also highlights certain key principles, or modus operandi, behind the music of the Olavi Trio. The first is that the Olavi Trio never rehearses as a group. In fact, members of the trio make it almost a point of pride to emphasize that they have not had a single rehearsal together in the more than a decade since the trio first appeared at promoter Charles Gil´s 40th anniversary party in 2004 - without any rehearsals, of course. This was a principle laid down from the outset by Teppo Hauta-aho so that "the music would never lose its freshness." Hauta-aho says that the importance of this approach to improvised music became clear to him as a result of working with pianist Cecil Taylor from 1997 until 1999. When the music is not rehearsed ahead of time, the musicians are forced to listen to each other carefully and true creative collaboration ensues. This principle was very much observed in connection with the recording of Oh, La Vie!, which was done "live in studio" without any rehearsals or other advance preparations.

The second key principle of the Olavi Trio is to avoid the use of written arrangements. Although Hauta-aho made a living as an orchestra musician for almost four decades and is an accomplished composer, with the Olavi Trio, he wanted to avoid having to read music. Instead, the emphasis has all along been on improvisation that liberates the musicians to communicate with each other without the bounds of a pre-set arrangement or structure. Perhaps, this is a case of a unique form of "paper allergy" developed by Hauta-aho as a result of some 40 years of suffering from continuous exposure to the dusty scores of classical compositions and operas performed by him as a member of two of Finland´s most prestigious orchestras. That same "allergy" also appears to ail Jari Hongisto, who for more than three decades has played with various jazz big bands and classical ensembles and now strongly prefers to avoid any written music when performing outside of those settings. In fact, that is currently one of his preconditions for joining any smaller group.

Although Olavi Louhivuori, the youngest member of the trio, still enjoys writing music, including many compositions for his own group, Oddarrang,and for various big bands and even a symphony orchestra, he too fully subscribes to the above principles when playing with the Olavi Trio. In fact, Jari Hongisto notes that during the years that the trio has played together, Louhivuori has grown from a fairly traditionally trained young jazz drummer into "an unbelievably versatile musician, who can play pretty much anything and is not fearful of improvisation." Hongisto remarks that "although Olavi might initially have been a little scared of playing with me and Kalmisto, he has grown more and more courageous over the years and now truly is one of three soloists in the trio rather than serving in the role of an accompanist. We are all equal in this group." This sentiment is seconded by Hauta-aho, who is notorious for his scorn for drummers who "destroy" the music by not listening to the other musicians. Hauta-aho feels that, in Louhivuori, he has found a drummer, who "listens to and reacts to the others rather than just doing his own thing oblivious to what is going on around him."

Those statements embody the third key principle of the Olavi Trio, total democracy among its members. All members of the trio emphasize that, despite their different ages and backgrounds, they are all equal partners when playing together. "To me, democracy is important in all good music," Hauta-aho has said. "With the Olavi Trio, everybody is free to take the music to a different direction and new things emerge constantly. We all react to what the others are doing and end up surprising each other." Although it might have been correct to initially call Hongisto and Louhivuori his students or protégées during their respective collaborations with Hauta-aho prior to the founding of the Olavi Trio, they have now moved well past that point. As an alternative to the use of the concept of "democracy," Hauta-aho also characterizes the Olavi Trio´s music as "polite anarchy." No member of the trio is setting rules for the others as to what they can or cannot play but, at the same time, each of them is making room for the others to express their own ideas. "Equal rights for all," he says.

Olavi Louhivuori notes that, while more than twice his age, Hauta-aho feels "ageless," thereby eliminating any need in the trio´s music for the kind of deference given to age in other contexts. This agelessness - being young at heart - may well be closely related to the fourth principle that the Olavi Trio observes in its music. Namely, all of its members agree that playing music together should provide enjoyment to both the musicians and their audience - it should be fun. This, of course, does not mean that the members of the Olavi Trio do not take their music seriously, quite the opposite. It also does not mean that humor dominates their music, although occasionally it does. For example, their use of toy instruments or bird calls can certainly be humorous at times - particularly when observed live in performance. To the Olavi Trio, enjoyment means that a certain joie de vivre is always present in their music and, hopefully, it can be heard on this recording as well. Louhivuori singles out this aspect of the Olavi Trio´s music as perhaps the most important lesson to him personally. "Through Teppo´s example - enjoying not only music but life in general - I have come to understand that this should actually be a pretty simple thing," he says. "You need to embrace life. Just improvise and enjoy yourself."

These key principles of the Olavi Trio´s approach to music - no rehearsals, no written arrangements, total democracy and always having fun - have not stopped the trio from developing. In fact, the trio´s music has in recent years shifted from the earlier days of almost totally open improvisation towards a more melodic approach. They may now even sometimes use composed themes as a starting point for improvisation, as is the case with five compositions on this recording, but most often the melodies simply emerge from their collective improvisation. In any case, they still do not play from sheet music and conversations before each take during this recording were brief, with the emphasis being on listening and creating together. And even when a written theme was being introduced, no rehearsing!

So, here you have it, by popular demand, the Olavi Trio. On its own. Downhill (Jari Hongisto)
was composed by Jari Hongisto for the Olavi Trio a few years ago but never played before Hongisto brought it to this recording as a theme for improvisation.

Kalle Killi (Teppo Hauta-aho)
was composed by Teppo Hauta-aho for the same event as one of the compositions included on the Olavi Trio´s first recording Triologia (TUM CD 026), "Four Paraphrases for Charles." The event was promoter Charles Gil´s 40th birthday in 2004 that also marked the first performance by the Olavi Trio. Both compositions were presented as a present to Charles Gil and used the notes implied by his name (C, H, A, E, Eb and G) as their starting point. As Gil was born under the sign of Cancer, the composition is, of course, also performed backwards. The full name of the composition is "Passaa Kaljaa Kallellen" or "Pass Beer to Charles" in a reflection of its celebratory origins.

Shoulder Twist (Hauta-aho - Hongisto - Louhivuori)
is a collective improvisation by the Olavi Trio.

Forest Walk (Olavi Louhivuori)
is a theme for improvisation composed by Olavi Louhivuori for this recording. "A Walk in a forest during late summer with a whiff of autumnal longing in the air."

Sideways (Hauta-aho - Hongisto - Louhivuori)
is a collective improvisation by the Olavi Trio.

Chaplin (Jari Hongisto)
was originally composed by Jari Hongisto in the mid-1990s for an outdoor performance of Charlie Chaplin´s silent film The Kid (1921) during the "Night of the Arts" event in Turku. A trio that included Hongisto, pianist Hannu Riikonen and saxophonist Tane Kannisto accompanied this showing of Chaplin´s first feature-length film as a director with music composed by Hongisto. "Chaplin" was first played by the Olavi Trio at this recording.

Whisperer (Hauta-aho - Hongisto - Louhivuori)
is a collective improvisation by the Olavi Trio.

Hurry Up! (Hauta-aho - Hongisto - Louhivuori)
is a collective improvisation by the Olavi Trio.

Evening Song (Olavi Louhivuori)
is a theme for improvisation composed by Olavi Louhivuori for this recording. "Looking out the window at a town already covered by the greyness of November."

Kun Ilta Ehtii (Robert von Essen - Olavi Virta)
is perhaps the best-known composition by Robert von Essen (1901-1957), a nobleman who was born in Volgograd (then known as Tsaritsyn) in Russia but made his career as a musician, composer and arranger in Finland and died in Sweden. During his military service in St. Petersburg in 1920-21, von Essen played in a military band and, after immigrating to Finland, became known particularly as a member of the Zamba Orchestra and for his collaborations with the likes of Allu Kosonen, Georg and Eugen Malmstén, Klaus Salmi and Tommy Tuomikoski. According to legend, singer Olavi Virta (1915-1972) wrote the wistful lyrics to "Kun ilta ehtii" ("When the evening comes, I remember you and my longing for you is bottomless") in five minutes in the studio right before his recording of the song with the Rytmi Orchestra in 1942. Virta recorded the song again in the early 1960s. Of Robert von Essen´s 80 or so known compositions, "Missä yösi vietitkään" has also lived on through recordings by singers Arvi Tikkala in 1939 and M.A. Numminen in 1970 (Swingin kutsu).